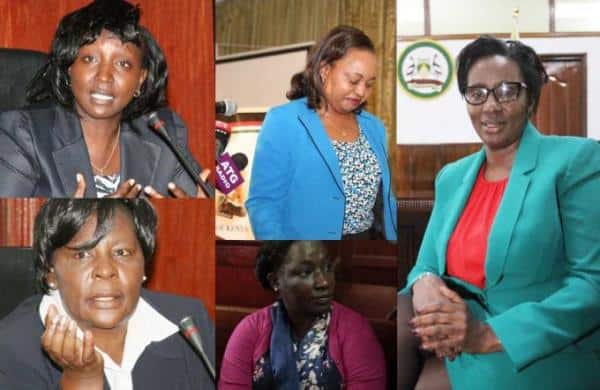 Chaos have erupted at Nairobi City Hall on Monday 10th September morning as a faction of Nairobi County Assembly members stormed the Speaker’s office in an attempt to eject her from the office. The fiasco followed her impeachment over what the MCA’s termed as “great misconduct.” Elachi’s case is one of the many that high profile Kenyan women have endured.

In a motion by Waithaka MCA Antony Kiragu, the members accused the speaker of gross misconduct. “Her actions and omissions have caused embarrassment and brought the office of the speaker into disrepute,” he said.

Elachi was impeached on grounds of constitutional violations and failing to meet the leadership and integrity act 2012.

Embattled former PS of Public Service and Youth Lillian Omollo was sacked in a mini cabinet reshuffle after she was suspended following her implication in a Sh9 billion NYS scam.

She served in the capacity for two and half years and was charged with the responsibility of transforming the face of service at NYS after it was hit by a corruption scandal in 2015.

Omollo spent 25 days at the Lang’ata Women’s Prison, 15 of which were spent in admission at the Kenyatta National Hospital after she fainted at the prison.

She denied the charges of conspiring to defraud NYS and is currently out on bail.

In 2015, Devolution CS Anne Waiguru announced her decision to resign citing health concerns occasioned by incessant attacks on her person, her family and her professional integrity. This was as a result of corruption at her ministry where Sh826 million was allegedly fraudulently spent.

Reacting to her public grilling sessions at the National Assembly, Waiguru categorically pointed out that her resignation was not in any way an admission of guilt to the loss of millions at the NYS.

She stayed put for months in the face of pressure to resign or step aside as well as three impeachment attempts in the National Assembly.

Waiguru has since joined politics and is currently the Governor of Kirinyaga County.

In a media briefing, The Judicial Service Commission (JSC) announced the sacking of Gladys Shollei as the Judiciary’s Chief Registrar, citing “misappropriation of funds, insubordination, incompetence and engaging in sideshows” as read by the then JSC Chair and Chief Justice Willy Mutunga.

The move by JSC marked an end to a two-month drama at the Supreme Court involving leaked emails to press, accounts hacking and claims of misappropriation of Sh80 million.

After her sacking, Gladys joined politics and vied for the Uasin Gishu County Women Rep seat on a Jubilee Party ticket during the 2017 General Elections, and won.

Nancy Baraza, the first DCJ under the new Constitution left office before the end of her term, in what would later turn out to be the first case of a jinxed office.

Baraza resigned as the Deputy Chief Justice of Kenya in 2012 after she was implicated in allegations of assault where she is said to have pinched the nose of a security guard Rebecca Kerubo ‘who didn’t know people’while brandishing a pistol at a shopping mall in Nairobi on December 31, 2011.

The curse of the DCJ office seemed to have followed her successors with Kalpana Rawal also leaving office prematurely after clocking the mandatory retirement age. Now, the current DCJ Philomena Mwilu has been arrested and charged with anti-corruption. Mwilu’s arrest has brought fear and confusion as to whether she will also follow her predecessors and leave office before her term ends.

Hilarious Video:African man who has acquired an American accent

There is no prestige in being a second wife-Christabel Atieno