Detectives believe they are on the trail of a complex tale of money, love, blackmail and murder as they try to piece together the last moments of Mary Wambui Kamangara, the businesswoman whose lifeless body was retrieved from a dam nearly two weeks ago.

This follows the interrogation of Michael Githae Mathenge, a car-hire services operator, who on Friday led police to a thicket in Ruiru where evidence key to resolving the mysterious death of Ms Kamangara was recovered.

Ms Kamangara was killed in the house of her husband Joseph Kori Karue’s mistress, Judy Wangui Mungai, on Saturday January 26 under circumstances that are yet to be fully established.

Detectives initially went with the lead given by Ms Mungai that she and Mr Karue were at the scene of the murder. Later, detectives removed Mr Karue from the scene without exonerating him following their tracking of his phone signal and vehicle.

Mr Mathenge also appeared to remove Mr Karue from the scene during interrogation in custody after he was arrested on Monday.

Basing his narration on what Ms Mungai also apparently told him, Mr Mathenge said Ms Mungai killed Ms Kamangara by hitting her on the forehead with a pressure cooker. 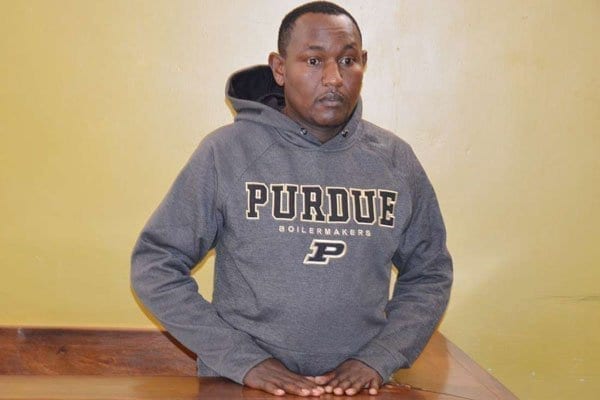 This is in line with post mortem findings, seen by Nation, that Ms Kamangara’s was hit with a blunt object nine times before being suffocated.

She died of brain concussion, the report concluded, with the skull having been crushed by between two and seven centimetres.

This contrasts sharply with the version Ms Wangui earlier gave the police suggesting that Mr Karue hit his wife with the butt of his gun.

Detectives are treating Mr Mathenge’s testimony with suspicion as he also sought to extricate him from blame, saying Ms Mungai blackmailed him into helping her dispose of the body from her apartment at Fourways Junction Estate.

Ms Mungai had earlier told detectives that after Mr Karue killed his wife, he gave her Sh2 million to buy her silence.

Detectives are now grappling with which version of the events, both told by Ms Mungai to different people in different circumstances, comes close to unravelling what happened that night.

Friday, Mr Mathenge led detectives to a thicket in Ruiru where he and Ms Mungai dumped the items used to dispose of the body. The clothes used to wrap the body in and a baby seat were recovered from the scene.

Missing, however, was the pressure cooker and a carpet that Mr Mathenge told police was spread on the back seat of the deceased’s Mercedes car where the body was laid on the way to disposal. In what would be an indictment of the lax manning of road blocks, Mr Mathenge told detectives they passed a police check at Kamiti Corner and they were waved on with only insurance being checked.

According to Mr Mathenge, police said, he went to Ms Mungai’s residence at Fourways Junction at 00:07 on her invitation, almost six hours after Ms Mungai and the deceased arrived there and started arguing over the love triangle involving Mr Karue.

Ms Wambui was apparently bitter after she found her husband’s photos hanging on the wall in the house with furnishings identical to those in their family home at Safari Park Gardens Estate.

A detective privy to the investigations said Ms Wambui reportedly demanded that Ms Mungai surrenders the logbook of her car — a Mercedez Benz identical to hers — saying she had heard her husband bought her the car.

A fight ensued and a knife that the two wrestled over was among the items recovered at the thicket around the Tatu City area. Police have taken the knife together with other items for forensic examination.

It is then that Ms Mungai, according to Mr Mathenge, rushed to the kitchen and picked a pressure cooker which she hit the deceased with on the head before strangling her with her hands.

She then took bed sheets and covers, wrapped the body and placed it inside the kitchen. Police suspect this may have happened at 20:20 hrs.

According to the CCTV footage retrieved from Fourways Junction, Ms Mungai left the estate at 21:54 using Ms Wambui’s car to Homeland Inn where the two women had earlier revelled in the afternoon.

According to police sources she wanted to pick a Toyota Allion, registration number KCE which had been hired out by Mr Mathenge and which she had left there as Ms Kamangara drove her to Fourways Junction. However, security guards declined to allow her to leave with the car because she did not have a gate pass.

“She parked the Mercedes car behind Homeland Inn and used a taxi to return to Fourways Junction where she arrived at 23:00 hours,” a detective told SaturdayNation.

It was around that time she is reported to have called Mr Mathenge to her residence. He told detectives that Ms Mungai had called him earlier in the day promising him some work later in the night.

The vehicle had been missing since before it was driven to Juja police station by someone who had hired it after learning it was being looked for by the police.

Driving in the Toyota Noah, the two returned to Homeland Inn but the security guards stood their ground. Ms Mungai picked the deceased‘s car and they both returned to Fourways at 01:28 hrs with the two cars. By this time, the two, according to Mr Githae’s account to police, had agreed on where the body would be disposed of and how they would ferry it.

“The Mercedes Benz was driven near the apartment stairs and, according to what Mr Mathenge has said, they both carried the body from the kitchen and placed it in the back,” a detective said on Friday.

A baby seat fixed at the back seat of Ms Mungai’s car was removed and placed at the passenger’s seat next to the driver to accommodate the body.

Using the Kiambu-Kamiti-Ruiru Road the two cars followed each other and at a roadblock at the Kamiti road junction, Mr Mathenge’s car was searched but not Ms Mungai’s.

Mr Mathenge said they drove to Mugutha, where the body was found on Sunday, January 27. Ms Mungai contemplated plunging the car with the body to the dam but later changed her mind.

While on their way back, they stopped at Gitambaya between Ruiru and Kiambu where, according to Mr Mathenge, Ms Mungai threw away the murder weapon, the beddings which had been used to wrap the body and the baby’s seat in a thicket.

They then proceeded to wards Githunguri through the Kirigit-Riabai Road where, along the way, they threw away a blood-stained carpet before proceeding to Kwa-Maiko Trading Centre where they abandoned the deceased’s car which was recovered two days later.

Kenya Embassy will only engage with registered Diaspora Organizations

Raila leaves for US trip, to return at the weekend