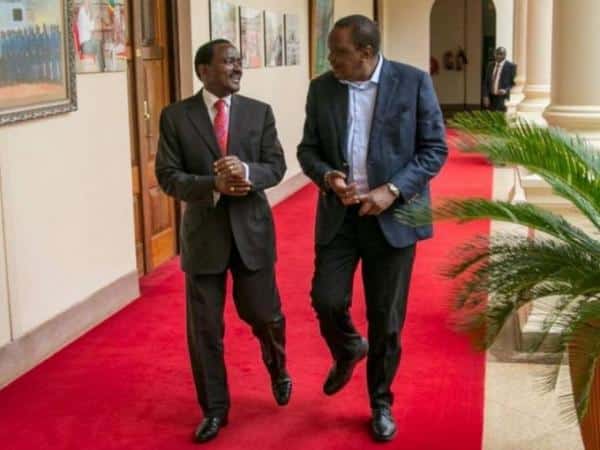 Uhuru Kenyatta is the best President Kenya has ever had, Wiper Leader Kalonzo Musyoka has said.

Kalonzo said, as a matter of fact, he can even step down for Uhuru to serve beyond his two terms as president.

“Uhuru is the best president and I admire what he is doing and thus he must be supported. If he leads his Jubilee troops to the 2022 contest and his party clinches the majority of seats, then whoever wins as president must appoint him as prime minister,” Kalonzo said.

Speaking during an interview on Citizen TV on Tuesday, Kalonzo, however, dismissed claims that he is advocating for an extension of presidential term limits.

He said his willingness to support Uhuru does not imply that he is trying to be his errand boy as has been widely reported.

“I am a very outstanding constitutional lawyer who does not advocate for an extension of the presidential term and this goes down to governors. In my opinion, I am looking at a 2022 post-election in a situation where we need to maintain a government of national unity. You cannot just write away Uhuru,” Kalonzo said.

The former VP said there is need to give Uhuru a role in government beyond 2022 but the said role should be crafted within the framework of the national government.

“Uhuru might want to retire but Kenyans want him to proceed. If he is not interested he can then nominate someone if he so wishes,” he said.

Kalonzo further said with regards to the ongoing debate on the referendum, the matter is settled and everyone seems to be agreeing with the idea of having an expanded executive to have an official opposition and perhaps a prime minister.

“As we gear towards 2022, there are going to be a lot of political alignments and if by any chance Wiper, ANC, ODM, Jubilee and Ford-Kenya merge, and I find myself contesting for position of PM with my brother Uhuru, then I would rather step down and support his bid,” Kalonzo said.

He said the decision by the Wiper Party to support Uhuru’s agenda was informed by the President’s commitment to fighting corruption and his Big Four Agenda and attempts to unite the country.

Kalonzo said all political leaders should strive to see that Kenya gets a non-contentious referendum if at all will happen.

He further took issue on the ‘watermelon’ saying such words hurt him.

“I have taken time to reflect on this tagging and I think Kenyans have wrongfully profiled me. I have always acted in the best interest of this country,” he said.

He added, “I always wonder why I get betrayed and punched all the time. It is so painful”