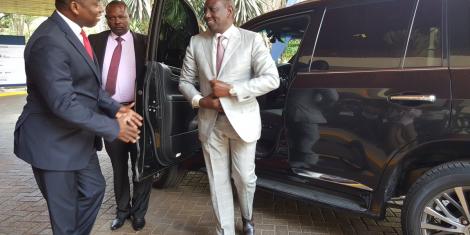 Deputy President William Ruto is the latest victim in a seemingly new crackdown after Nyeri county administration pulled out its security from his church function Thursday.

According to a report by Citizen TV, the DP landed in Tetu constituency where he was to be received by security dispatched by the county and the sub-county administration which was conspicuously missing.

The media outlet further claimed that the order to withdraw the security originated from the provincial administration and that the freeze was expected to last for a while.

This comes just days after the security of that of his close allies was withdrawn on claims that the leaders continued to engage in pre-mature campaigns.

Some of his allies who had their security completely withdrawn included Kiambu Governor Ferdinand Waititu and MPs Kimani Ichung’wa (Kikuyu) and Alice Wahome (Kandara).

This comes just hours after the president addressed his whole outfit with former prime minister Raila Odinga explaining that the handshake did not even affect the political landscape.

“When it comes to infrastructure, what do we need to do? We discuss and we support each other and agree,” Uhuru declared.

He further refuted claims that Raila caused havoc in the Jubilee party explaining that he was getting a tone of ideas from the AU envoy.

“He also gives me ideas that enhance something and make it even better. Now, what’s wrong with that?” Uhuru posed.

Photos: Eric Omondi Having A Nice Time In US

VIDEO: Size 8 packed all her stuff and left – Dj Mo opens up