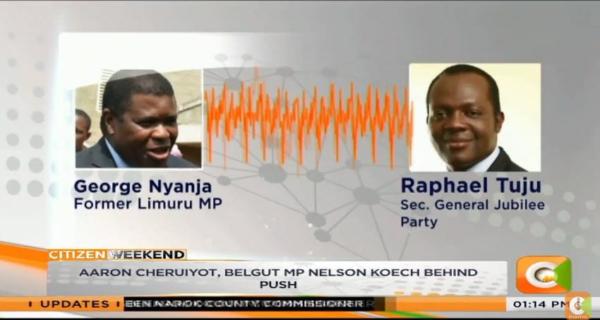 A section of Jubilee Parliamentarians now want the Party’s Secretary General Raphael Tuju to either resign or be sacked, for allegedly fueling division within the ruling party.

The Mps who are allied to Deputy President William Ruto’s faction dubbed ‘tanga tanga’ claim Tuju was a key member of the ‘Stop Ruto movement’.

The legislators cited an audio clip doing rounds on social media, featuring voices suspected to be those of Tuju and Kiambu politician George Nyanja.

“We want you to come out and disown that video, failure to do that we will confirm that the President, his deputy and members have no issues…the problem is with the party officials…,” said Kericho Senator Aaron Cheruiyot.

“We cannot have a Secretary General who betrays the very government we have formed…you must immediately tender your resignation to the President and let the party pick someone else…,” said Kandara Mp- Alice Wahome.

Tuju has remained mum over the leaked telephone conversation with Nyanja, that was laced with anti-Ruto sentiments.

The Deputy President and his allies previously claimed that Tuju was part of a team that was keen on scuttling his bid to succeed President Uhuru Kenyatta in 2022.

“ It is not possible that the deputy president went round campaigning and after ensuring the win some of you start sitting in hotels to witch-hunt, may your plans fail,”said Cheruiyot.

Tuju also sits in the Cabinet, as the ruling party’s representative in an arrangement announced by the President, that was borrowed from the Chinese government model.

Jubilee officials picked after the merger of 14 political parties ahead of the 2017 general election were to serve for a term ending in March next year, to pave way for party grass-root polls, that would culminate in the election of national officials.

“About a year ago I said that Tuju was given that position to give the party a national outlook, but now even at the grassroots, people are now saying that Tuju must go…,” added Cheruiyot.

Whether Jubilee Party will  hold grass-root elections remains the ultimate question, more so, at a time the Pangani based outfit is split between Kenyatta-allied ‘kieleweke’ and pro-ruto’s ‘tanga tanga’ factions.