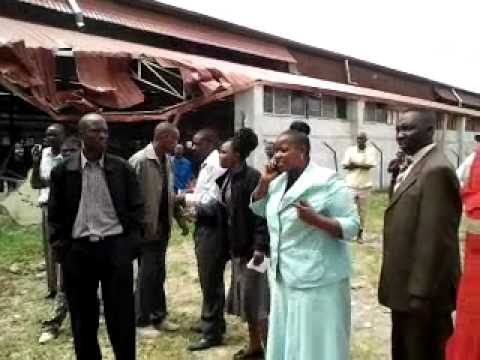 When NENO evangelism church was demolished: Faithful of Neno Evangelism Centre watched in horror as a bulldozer entered the compound and pulled down the church.Televangelist Apostle James Ng’ang’a, who is said to be out of the country, heads the church located along Haile Selassie Avenue, Nairobi.Members of the church said the City Council of Nairobi bulldozer came at around midday and started tearing it down over claims that the structure has no approval plan.

The value of property that was destroyed was not clear, but falling debris and the bulldozer crushed some of the church’s equipment.

Starehe MP Margaret Wanjiru and Nairobi acting Mayor George Aladwa arrived moments later and condemned the action. “We are surprised the City Council can start demolishing structures in the city without giving notice. This should not be happening to Kenyans, especially with a new Constitution in place,” said Ms Wanjiru.She said the plot was privately owned and asked Local Government Minister Musalia Mudavadi and the council to explain who issued the demolition order.Legal redress

But Mr Aladwa said he was not briefed of the intended demolition and promised to take action against those who ordered the exercise.”The law is clear that a notice must be given if a demolition is to take place even if a structure has no approval from the authorities,” he said.He asked the church committee to visit the council to iron out the issue.Earlier the advocate for Neno Evangelical Centre, Charles Ngugi, had threatened to seek legal redress against the council to recover property that was destroyed.He expressed fear that the bulldozers could return at night and pull down the rest of the building.

Ben Githae: Truth is I strayed, I have 3 beautiful daughters…

The church owns a car park and an eatery that is leased out to traders.Recently the council demolished a house belonging Lands assistant minister Bifwoli Wakoli.Mr Wakoli said council askaris descended on the servant’s quarter in Nairobi’s South C Estate with bulldozers and brought it down. The Bumula MP said his son, who lives in the house, was in the house when the askaris struck.

FUEL PRICES FALL TO ALL TIME LOW IN KENYA