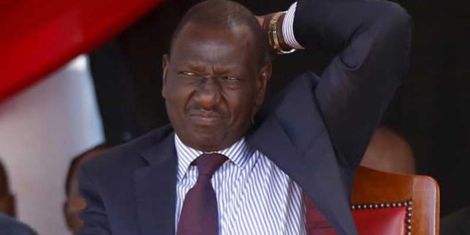 Kenyan Man in Dress Force DP Ruto to Stop His Motorcade: On Sunday, DP William Ruto was forced to stop his motorcade by a man in a dress. Ruto went on to gift the young man who had carried a poster which warmed the DP’s heart.

Ruto gave an undisclosed amount of money to the young man who was dressed in a white gown complete with a veil, according to Nation.

Ruto was attending a fundraiser in aid of the East African Pentecostal Church at Gikumene Secondary School in Meru.

During the service, several politicians referred to the DP as ‘Mheshimiwa Rais’ (His Excellency the president) before explaining that the slip of the tongue was a prediction of the future.

“Besides being a politician, I am also a pastor in the AIPCA Church. My tongue has slipped and called you president. I assure you that it is not a slip of the tongue but a prophecy and a sign that angels are backing you,” Moses Kirima, Central Imenti MP stated.

During the event, Ruto’s efforts to stop politicians from engaging in 2022 politics were in vain as North Imenti MP, Rahim Dawood, denied claims that there was a plot to scuttle the DP’s meeting.

“The claims that some Meru politicians tried to stop the DP from coming to Meru are untrue,” Dawood refuted.

The DP blasted both BBI and Punguza Mizigo push for a referendum.

“We want to end the politics of division and hatred to unite Kenyans and focus on development. I want all Jubilee leaders not to veer off from that agenda. The debate about 2022, and the referendum should not overshadow development,” the DP conveyed.

Kenyan Man dies when train hits him in Richmond Texas

Want a MIRACLE, then here is a real Pastor not Njoroge of Mwende