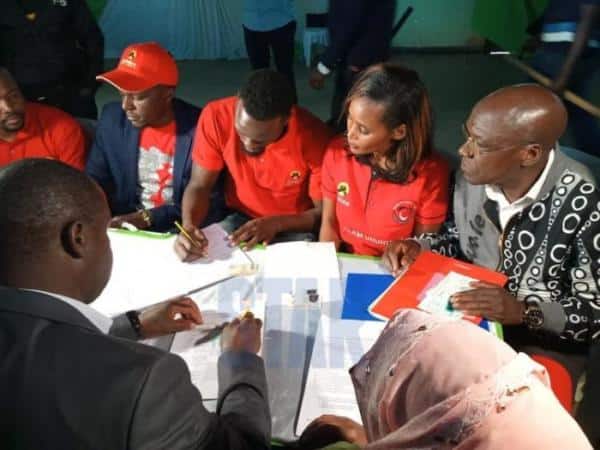 Ms Thumbi, who is a nominated Member of County Assembly (MCA) in Nairobi, became a trending topic on Tuesday evening after she accompanied the Jubilee’s candidate to the Independent Electoral and Boundaries Commission (IEBC) offices to be cleared for the mini-polls slated for November 7.

She came to the limelight following the death of Okoth after she went to court to block the late legislator’s interment until her son, who she claimed was fathered by Okoth, was recognized by his family. DNA results last week confirmed that the baby in question was sired by Okoth.

Many Kenyans expected her to support Okoth’s brother, Benard Otieno alias Imran, who is contesting for the seat on an Orange Democratic Movement (ODM) party ticket.

However, speaking to a local media on Wednesday, Ms Thumbi defended her support for Mariga saying she was nominated to the Nairobi County Assembly by the Jubilee party, hence, her loyalty.

“I was nominated to the Nairobi County Assembly under the Jubilee Party. I, therefore, am obligated to stick with the party’s choice in the race for Kibra parliamentary seat. Jubilee’s choice, as of today, is Mariga, and I needed to show him my support,” said Ms Thumbi.

She, however, declined to give a comment on how well she relates with Imran.

Meanwhile, Mariga, whose nomination was rejected by IEBC, has filed a complaint with the electoral commission’s dispute resolution committee.

The international football star was barred from contesting on grounds that he was not a registered voter.

This was after his name was found missing from the 2017 voter register on Tuesday.

“The complainant is indeed a registered voter .. he was registered on August 26th as a voter in Kariokor Social Hall polling station in Starehe Constituency,” Mariga said on Wednesday in a sworn affidavit.

“The decision (to bar him from contesting) is improper null and void for want of lawful invalidation since the complainant is actually a registered voter.”