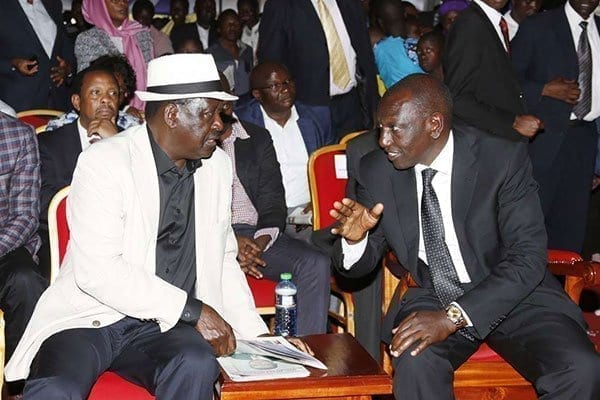 Sustained enmity between Raila and Ruto Dangerous for Kenya: In the current matrix of our politics, only Deputy President William Ruto and Opposition leader Raila Odinga have the ability to stir extreme emotions, not just among ordinary citizens, but the top leadership as well.

Some elected leaders, powerful in their own right, have been more than willing to go out on a limb to defend the viewpoints of Raila and Ruto. In the process, some have made complete asses of themselves as if to prove King Henry VII right in his observation; “the problem with political jokes is that they get elected”.

We have seen this in the Kieleweke, Tangatanga, Inua Mama and Embrace political groupings that push conflicting agendas in the guise of championing the cause of ordinary citizens.

It has been evident in the outbursts by leaders over impending and past Mau Forest evictions and the heat generated by discourse on the possibility of a referendum before the 2022 General Election.

While the fight against corruption should have made our national leadership speak in accord, it has achieved the opposite.

What better than the March 9, 2019 handshake between President Uhuru Kenyatta and Raila Odinga, erstwhile bitter opponents, to buttress this?

While the motivation for the handshake was to unite a politically divided country, using the Buildings Bridges Initiative as the conveyance vehicle, unintended consequences threaten the good intent behind the initiative. These include the likely implosion of Jubilee over mistrust and what has been perceived as political betrayal.

The handshake, in as much as it was between Kenyatta and Raila for the good of Kenya, has morphed into a political contest between Raila and Ruto.

To Ruto allies who considered his 2022 ascension to power fait accompli based on an obscure memorandum of understanding within Jubilee, it was a scheme to kill Ruto’s 2022 dream.

To Raila allies, it was a bridge to unite Kenyans; an event that also gave him a lifeline to 2022 elections.

Because of BBI, Raila and Ruto, while scoring off each other politically, are inadvertently; perhaps even deliberately, dividing the country while pushing thinly veiled self-interests. Why then keep the pretence about uniting Kenyans?How can they while pitting eight millions Kenyans who voted for Ruto’s team in 2017 against seven million who supported Raila?

Corruption might be a menace in society, but there is no greater harm to this country than sustained enmity between Raila and Ruto; probable front runners for the presidency in 2022.

If indeed the two have the interest of Wanjiku at heart in their deliberations, they should tone down on their divisive rhetoric which, doubtless, gives succour to negative ethnicity.They must tackle issues dear to Kenyans or risk coming across as feeble minded leaders. That could entrench the perception that Wanjiku has never been the focal point of their supposed visions for Kenya

Raila’s vehemence in opposing the Thirdway Alliance’s Punguza Mizigo initiative, even using ODM MPs to badmouth the initiative and convince MCA’s to reject it dents his projected image as a social democrat.

It is symptomatic of intolerance to views not fronted by him or his party, which makes BBI suspect; more so because it was never a popular initiative by the true definition of the phrase. Those who suspect that BBI is out to saddle Kenyans more could soon be vindicated.Notably, while Raila chose to directly oppose the Thirdway Alliance’s Punguza Mizigo initiative, Ruto has been circumspect.

However, the fact that Uasin Gishu County, Ruto’s backyard is the first to endorse Punguza Mizigo speaks volumes.A lot of behind the scenes power play must have been employed. The endorsement not only expresses disdain for BBI, it widens already visible rifts within Jubilee, a party at risk of self-immolation.

The belligerent duo must tone down. In the book of Ephesian 4; 31, the Bible says, “Let all bitterness and wrath and anger and clamour and slander be put away from you, along with all malice”.

In 2007, Raila and Ruto were the best of friends, yet their relationship today is defined by bitterness, anger and slander evidenced in tags such as ‘Lord of poverty’ and “Prince of corruption”.Canadian lawyer-cum writer Robin Sharma says that “leadership is not about a title or a designation.

It’s about impact, influence and inspiration. Impact involves getting results, influence is about spreading the passion you have for your work, and you have to inspire team-mates and customers”.He goes on to say that leadership is not a popularity contest; it’s about leaving your ego at the door.

The name of the game is to lead without a title.To sum it up, Proverbs 10; 11 says; “the mouth of the righteous is a fountain of life, but the mouth of the wicked conceals violence”. Let’s choose the former.

Mr Chagema is a correspondent for the Standard. [email protected]