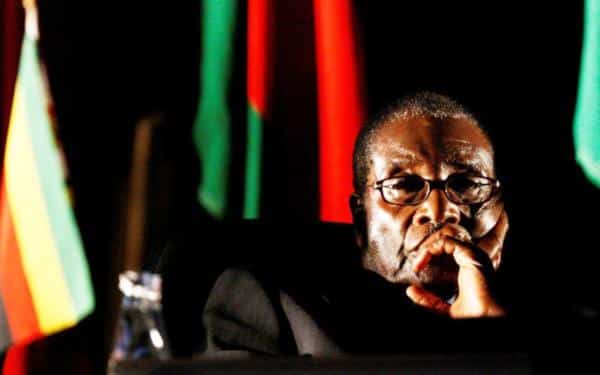 The life and times of Robert Mugabe-His famous quotes: Zimbabwe’s Robert Mugabe (pictured) was feted as an African liberation hero and champion of racial reconciliation when he first came to power in a nation divided by nearly a century of white colonial rule.

Nearly four decades later, many at home and abroad denounced him as a power-obsessed autocrat willing to unleash death squads, rig elections and trash the economy in the relentless pursuit of control.Mugabe, who died in Singapore aged 95, was ultimately ousted by his own armed forces in November 2017.

He demonstrated his tenacity – some might say stubbornness – to the last, refusing to accept his expulsion from his own ZANU-PF party and clinging on for a week until parliament started to impeach him after the de facto coup.His resignation triggered wild celebrations across the country of 13 million. For Mugabe, it was an “unconstitutional and humiliating” act of betrayal by his party and people, and left him a broken man.

Confined for the remaining years of his life between Singapore where he was receiving medical treatment and his sprawling “Blue Roof” mansion in Harare, an ailing Mugabe could only observe from afar the political stage where he once strode tall. He was bitter to the end over the manner of his exit.

On the eve of the July 2018 election, the first without him, he told reporters he would vote for the opposition, something unthinkable only a few months before.Educated and urbane, Mugabe took power in 1980 after seven years of a liberation bush war and – until the army’s takeover – was the only leader Zimbabwe, formerly Rhodesia, knew since independence from Britain.

But as the economy imploded starting from 2000 and his mental and physical health waned, Mugabe found fewer people to trust as he seemingly smoothed a path to succession for his wife Grace, four decades his junior and known to her critics as “Gucci Grace” for her reputed fondness for luxury shopping.

“It’s the end of a very painful and sad chapter in the history of a young nation, in which a dictator, as he became old, surrendered his court to a gang of thieves around his wife,” Chris Mutsvangwa, leader of Zimbabwe’s influential liberation war veterans, told Reuters after Mugabe’s removal.‘A JEWEL’Born on Feb. 21, 1924, on a Roman Catholic mission near Harare, Mugabe was educated by Jesuit priests and worked as a primary school teacher before going to South Africa’s University of Fort Hare, then a breeding ground for African nationalism.

Returning to then-Rhodesia in 1960, he entered politics but was jailed for a decade four years later for opposing white rule.When his infant son died of malaria in Ghana in 1966, Mugabe was denied parole to attend the funeral, a decision by the government of white-minority leader Ian Smith that historians say played a part in explaining Mugabe’s subsequent bitterness.

After his release, he rose to the top of the powerful Zimbabwe African National Liberation Army, known as the “thinking man’s guerrilla” on account of his seven degrees, three of them earned behind bars.Later, as he crushed his political enemies, he boasted of another qualification: “a degree in violence”.

After the war ended in 1980, Mugabe was elected the nation’s first black prime minister.“You have inherited a jewel in Africa.

Don’t tarnish it,” Tanzanian President Julius Nyerere told him during the independence celebrations in Harare.Initially, Mugabe offered forgiveness and reconciliation to old foreign and domestic adversaries, including Smith, who remained on his farm and continued to receive a government pension.In his early years, he presided over a booming economy, spending money on roads and dams and expanding schooling for black Zimbabweans as part of a wholesale dismantling of the racial discrimination of colonial days.With black and white tension easing, by the mid-1980s many whites who had fled to Britain or South Africa, then still under the yoke of apartheid, were trying to come home.

But it was not long before Mugabe began to suppress challengers, including liberation war rival Joshua Nkomo.Faced with a revolt in the mid-1980s in the western province of Matabeleland that he blamed on Nkomo, Mugabe sent in North Korean-trained army units, provoking an international outcry over alleged atrocities against civilians.Human rights groups say 20,000 people died, most of them from the minority Ndebele tribe from which Nkomo’s partisans were largely drawn.

The discovery of mass graves prompted accusations of genocide.After two terms as prime minister, Mugabe tightened his grip on power by changing the constitution, and he became president in 1987. His first wife, Sally, who had been seen by many as the only person capable of restraining him, died in 1992.A turning point came at the end of the decade when Mugabe, by now a leader unaccustomed to accommodating the will of the people, suffered his first major defeat at the hands of voters, in a referendum on another constitution. He blamed his loss on the white minority, chastising them as “enemies of Zimbabwe”.

Days later, a groundswell of black anger at the slow pace of land reform started boiling over and gangs of black Zimbabweans calling themselves war veterans started to overrun white-owned farms.

Mugabe’s response was uncompromising, labeling the invasions a correction of colonial injustices.“Perhaps we made a mistake by not finishing the war in the trenches,” he said in 2000. “If the settlers had been defeated through the barrel of a gun, perhaps we would not be having the same problems.”The farm seizures helped ruin one of Africa’s most dynamic economies, with a collapse in agricultural foreign exchange earnings unleashing hyperinflation.

The economy shrank by more than a third from 2000 to 2008, sending unemployment above 80 percent. Several million Zimbabweans fled, mostly to South Africa.Brushing aside criticism, Mugabe portrayed himself as a radical African nationalist competing against racist and imperialist forces in Washington and London.

The country hit rock bottom in 2008, when 500 billion percent inflation drove people to support the challenge of Western-backed former union leader Morgan Tsvangirai.Facing defeat in a presidential run-off, Mugabe resorted to violence, forcing Tsvangirai to withdraw after scores of his supporters were killed by ZANU-PF thugs.South Africa, Zimbabwe’s neighbor to the south, squeezed the pair into a fractious unity coalition but the compromise belied Mugabe’s grip on power through his continued control of the army, police and secret service.

As old age crept in and rumours of cancer intensified, his animosity toward Tsvangirai eased and the two men enjoyed weekly meetings over tea and scones, in a nod to Mugabe’s affection for British traditions.On the eve of the 2013 election, Mugabe dismissed cries of autocracy and likened dealing with Tsvangirai to sparring in the ring. “Although we boxed each other, it’s not as hostile as before,” he told reporters.Even as he spoke, Mugabe’s agents were busy finalising plans to engineer an election victory through manipulation of the voters’ roll, according to the Tsvangirai camp.

It was typical of Mugabe’s ability to out-think – and if necessary out-fight – his opponents, a trait that drew grudging respect from even his sternest critics.Writing in a 2007 cable released by WikiLeaks, then-U.S. ambassador to Harare Christopher Dell reflected the views of many: “To give the devil his due, he is a brilliant tactician.”

Robert Mugabe, who has died aged 95, was Zimbabwe’s president for 37 years.

He had a long history of making colourful or controversial remarks during his nearly four decades.

He was ousted in a military coup in November 2017.

Here are some of them:

1980: “It could never be a correct justification that because the whites oppressed us yesterday when they had power, the blacks must oppress them today.”

2000: “You are now our enemies because you really have behaved as enemies of Zimbabwe. We are full of anger. Our entire community is angry and that is why we now have the war veterans seizing land.”

2002: “Our party must continue to strike fear in the heart of the white man, our real enemy.”

2001: “The British were brought up as a violent people, liars, scoundrels and crooks… I am told that (former British PM Tony) Blair was a troublesome little boy at school.”

2010: “Worse than pigs and dogs… Those who do it, we will say, they are wayward. It is just madness, insanity.”

2013: “(President Barack) Obama came to Africa saying Africa must allow gay marriages… God destroyed the Earth because of these sins. Weddings are for a man and a woman.”

2013: “Mandela has gone a bit too far in doing good to the non-black communities, really in some cases at the expense of (blacks)… That’s being too saintly, too good.”

2003: “I am still the Hitler of the time. This Hitler has only one objective, justice for his own people, sovereignty for his people, recognition of the independence of his people.

“If that is Hitler, then let me be a Hitler tenfold.”

2017: “May I say to the United States President, Mr Trump, please blow your trumpet. Blow your trumpet in a musical way towards the values of unity, peace, cooperation, togetherness, dialogue, which we have always stood for.”

2007: “Our economy is a hundred times better, than the average African economy. Outside South Africa, what country is [as good as] Zimbabwe? … What is lacking now are goods on the shelves – that is all.”

Before his first wife died in 1992, Mugabe started a relationship with Grace, whom he married in 1996.

1998: “I wanted children and this is how I thought I could get them. I knew what I was doing and my wife knew.”

1962: “Africa must revert to what it was before the imperialists divided it. These are artificial divisions which we, in our pan-African concept, will seek to remove.”

2015: “African resources belong to Africa. Others may come to assist as our friends and allies, but no longer as colonisers or oppressors, no longer as racists.”

False reports of Mugabe dying were a feature of his old age.