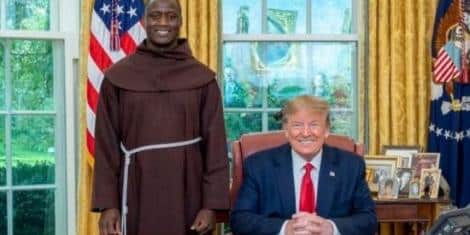 Through a tweet, White House Press Secretary Stephanie Grisham lauded Tabichi’s work saying his dedication to helping the poor is an inspiration to many.

“This morning, President Donald Trump met with Peter Tabichi, the recipient of the 2019 Global Teacher Prize!

“Peter is a science teacher who gives away 80% of his monthly income to help the poor in his home country of Kenya.

“His dedication, hard work, and belief in his student’s talent has led his poorly resourced school in Kenya to emerge victorious after taking on the country’s best schools in national science competitions,” wrote Grisham.

Adding: “Peter, you inspire us all! Thank you for your commitment to your students.”

Tabichi, a Math and Physics teacher at Keriko Mixed Day Secondary School in Njoro, Nakuru County, is also set to address the 74th session of the United Nations General Assembly in New York that starts today.

He is a member of the St Franciscan brothers and according to Brother Tony Donald from Ireland, Tabichi will recite the St Francis prayer before the start of the general assembly.

“This is a big honour for St Franciscan brothers. It shows that the UN recognises our order as it plays a key role in the development of humanity,” he said.

In April this year, Tabichi was appointed as the first “Champion for Children in Conflicts and Crisis” for Education Cannot Wait, the global fund for education in crisis.

He now champions the cause of the 75 million children whose education is disrupted by conflicts and natural disasters.

Travelling to the world’s most crisis-affected children and with planned engagements at the 2019 United Nations General Assembly and other high-level events, it is hoped his inspiring story and powerful voice will help raise the urgency on the world stage to invest in the future of children in crisis.

Former UK Prime Minister Gordon Brown, the UN Special Envoy for Global Education and Chair of Education Cannot Wait’s High-Level Steering Group, recently described Tabichi as an inspiration to all involved in teaching and learning, and said he is looking forward to working with him.

APPLY FOR DEFERRED ACTION UNDER THE NEW OBAMA DIRECTIVE

Church On The Cross: One Faith, One Jesus; Different Social Statuses