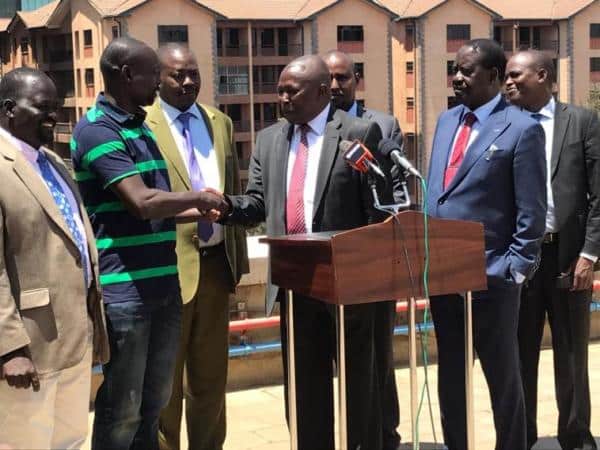 ODM Secretary General Edwin Sifuna said their partners in Nasa had undermined the spirit of the alliance by fielding candidates to compete with the party’s flag-bearer Imran Okoth.

He said the party would build new coalitions with those who supported its quest to recapture the seat left vacant following the death of Ken Okoth in July.

“We have our friends from Nasa who want to use the opportunity to formalise their divorce from the coalition,” Mr Sifuna said, referring to Amani National Congress (ANC), which has sponsored Mr Odinga’s former aide Eliud Owalo, and Ford-Kenya, which fronted Khamisi Butichi.

“Out of this by-election, we are going to count our friends and our enemies. New alliances will be formed. We are counting our friends like Maina Kamanda (Jubilee), Cleophas Malala and Geoffrey Osotsi (both of ANC) in this election.

This same team will spearhead the Building Bridges Initiative (BBI) report and proceed to the 2022 elections,” Sifuna said.The statement escalates the tension in Nasa, which also includes Kalonzo Musyoka’s Wiper, which is supporting Ford-Kenya’s candidate.

Sifuna described Musalia Mudavadi’s ANC and Moses Wetang’ula’s Ford-Kenya as parasites that have been political baggage for the Orange party.

“We have known these people as parasites and leeches, which we have carried on our back,” Sifuna claimed in an exclusive interview on KTN’s Point Blank show hosted by Tony Gachoka last night.Nasa has been at war with itself since Mr Musyoka, Mr Mudavadi and Mr Wetang’ula snubbed Raila’s controversial swearing-in in January last year, following the 2017 repeat presidential election.

Things came to a head in March 2018 when Raila and President Uhuru Kenyatta resolved to work together.

Ford-Kenya Secretary-General Eseli Simiyu, however, dismissed Sifuna’s sentiments, saying: “ODM is the problem in the coalition.

The coalition instruments are very clear. They can only walk out.”ODM Chairman John Mbadi sought to defuse the tension, saying: “We are not talking about alliances at the moment. If there would be any alliance, it will come at the right time. It would be premature to start mixing 2022 elections and the BBI report. Our focus now is to achieve the agenda of the BBI.”

Mr Kamanda, a Jubilee nominated MP, said: “We are in Kibra because we have seen the peace brought by the handshake in the city. The Kibra seat is not adding any value to Jubilee, rather, it is just working against the goodwill we have had with Raila.“About the Nasa family, I don’t want to talk about it. But every party welcomes the support of another, so if ODM wants to work with us, this is a welcome thing.”

Sifuna said political alliances were shaping up in Kibra campaigns, adding that the team campaigning for Imran would lead in drumming up support for the BBI report. Those opposed to Mr Imran, he said, would rally the country against the document.Kamanda, Nairobi Speaker Beatrice Elachi, and Youth and Gender Affairs Chief Administrative Secretary Rachel Shebesh are some of the Jubilee politicians who have declared support for Imran.

In ANC, Kakamega Senator Malala and Nominated MP Osotsi have ditched Mr Owalo for Imran.Sifuna said they expected more MPs to join the “handshake team”, adding that more Jubilee politicians allied to the President were backing the ODM candidate as a warm-up for selling BBI, which is expected to culminate in a referendum.Kanu, under Baringo Senator Gideon Moi, has also declared support for Imran.

The Standard has established that more politicians from Jubilee and other political parties will on Sunday join Raila at Joseph Kangethe Grounds for the final rally for the party’s candidate.“Imran will be the first handshake MP,” Sifuna said.He further claimed Mudavadi was scheming to join hands with Deputy President William Ruto in fighting the BBI report.

Sifuna alleged that ODM was aware of Mudavadi’s political manoeuvres, and that the two leaders could be headed for a political coalition ahead of the 2022 election.  However, Mudavadi has in the past ruled out a 2022 political pact with Dr Ruto.