Sarah Wairimu Remanded again,Cohen family says she is a Danger 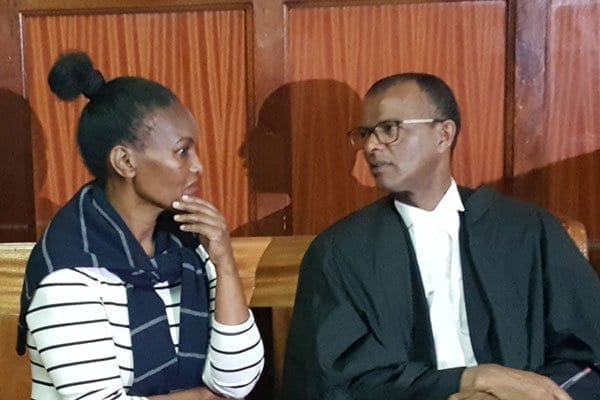 Sarah Wairimu Remanded again,Cohen family says she is a Danger: Sarah Wairimu, a suspect in the murder of her Dutch husband Tob Cohen, will know the status of her bail application next Friday.

Lady Justice Stellah Mutuku directed that she be remanded at Lang’ata Women’s Prison.

Cohen family’s lawyer Cliff Ombeta said his clients want Ms Wairimu, who has been in custody since August 28, denied bail because she is a danger.

“If the accused could stay in the same compound with her deceased husband in the septic tank, then it means she is a dangerous person who can hurt anybody,” Mr Ombeta.

But defence lawyer Philip Murgor argued that Ms Wairimu should be set free since detectives from the Directorate of Criminal Investigations have not found evidence linking her to the crime.

Mr Murgor said his client is not a flight risk since police took away her passport, and that she cannot access her house after it was cordoned off by order of Inspector Clement Mwangi.

“There is an ulterior motive by the police to seek further detention of Sarah so that they can give away her matrimonial property to the deceased’s siblings… It is Sarah’s position that she is not responsible for the death of her husband,” he said.

But Mr Ombeta and State Prosecutor Wangui Gichuhi urged the court to decline the bail application because she will interfere with witnesses.

Relying on the affidavit of Investigating Officer Maxwell Otieno, Ms Gichuhi said the accused had forced her employees to lie to the police about her husband’s whereabouts. They later recanted.