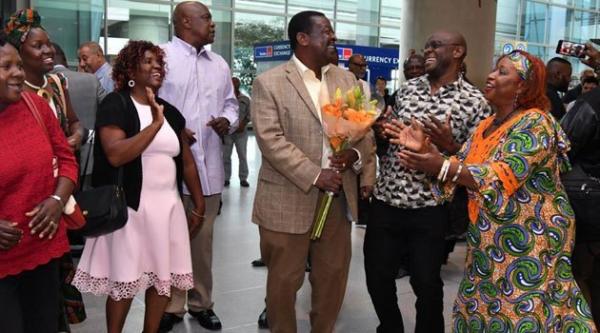 Mudavadi targets Kenyans in Diaspora in his 2022 Game Plan: Amani National Congress (ANC) party leader Musalia Mudavadi has began his two-week tour of the United States with Kenyans in the diaspora as part of the agenda.

According to Mudavadi, his US tour is meant to strengthen the relationship of the Kenyans living in the diaspora and to put up equitable measures to have them fully represented in his 2022 pact plan.

In the tour, the ANC leader is expected to hold lectures and meetings that will involve face to face encounters with the people in the diaspora and a peek into the challenges they face while outside the country.

Sources have revealed that Mudavadi aims to woo voters and market his 2022 top seat agenda. In a plot for affirmation. He was accompanied by two ANC MPs who ideally intend to market the party.

“He is expected to hold meetings on September 30 and October 1 in Washington DC and later meet the Kenyan Business Community in Atlanta,” said Vihiga MP Alfred Agoi who had also accompanied him.

Initially before the US tour, Musalia had embarked on a country wide tour in Kenya where he visited Makueni, Kakamega and Kajiado Counties to popularize the party agenda.

He has also been very vocal lately regarding the 2022 elections saying that he was ready to face his competitors head on. He has insisted that he will not solicit or beg for support from anyone come the next general elections.

He faced backlash after unveiling Eliud Owallo as the party candidate for Kibra race, although he rubbished the claims by the leaders who were tarnishing his name adding that he did not owe anyone political allegiance.

“I have not betrayed anyone politically and leaders propagating the lies should stop. My party unveiled its candidate just as it is a constitutional right,” said Mudavadi while campaigning for Owallo.

the US tour is aimed at giving Musalia and his party the millage he needs to counter the parties ahead of 2022 and ideally deliver his much awaited win.

What you need to know before importing a car to Kenya