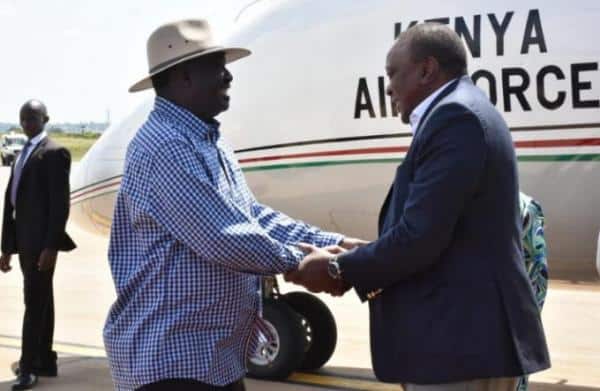 Has former Prime Minister Raila Odinga, become the citadel to President Uhuru Kenyatta’s legacy after the end of his Presidential term in 2022? If it turns to be true, then the book of Psalms 118:22, where the Bible talks about the stone which the builder neglected but ended up becoming the cornerstone will be a solid reality.

Presently, President Kenyatta can visit Luo Nyanza the home turf of Raila, anytime and attract jubilant locals, something he would not do before the famous handshake of March 2018.

Indeed, President Kenyatta, is viewed by Raila’s tribesmen as the biblical Saul who transitioned to Paul on his way to Damascus after the angelic visitation.

The handshake has thawed criticism on the President from many ODM leaders beyond Luo Nyanza. For instance, governor Hassan Joho’s abrasive politics towards the Jubilee government has since changed. In fact, bromance between Kenya’s most powerful Cabinet Secretary, Dr. Fred Matiangi, and Raila has blossomed tremendously after the handshake contrary to the time before the handshake.

Since he took power in 2013, President Kenyatta has portrayed a picture of an affable leader who mingles freely with the lowly in society. He has demystified the presidency more than his late father, retired President Daniel Moi and Mwai Kibaki.

On the downside, President Kenyatta, hasn’t done well to nurture good governance, inculcating good leadership culture and respecting the rule of law. Besides, his failure to entrench transparency and accountability and fighting graft continue to the greatest impediments in his presidency.

Current negative events in the country if not urgently addressed will put the legacy of the President in jeopardy unless he makes a fast ‘u’ turn.

He scores poorly on inclusivity. Majority of key positions in his government are people from his community and that of his deputy, William Ruto.

The most critical question many Kenyans have been asking is, what President Kenyatta shall pass on to the next generation and also what Kenyans shall remember him for when he exits the corridors of power in 2022.

The importation of expensive anti-riot gear (water cannons) from China a year before the 2017 election was the clearest indicator that the Uhuru government was prepared to use the thorax to retain power irrespective of the election outcome.

Saying is one and doing is another. On June last year, two months before the famous handshake, President Kenyatta promised a new lifestyle audit that will stipulate the assets of all public servants, including himself. Two years later, he doesn’t talk about it.

On electoral reforms, if today President Kenyatta decided to agree for a new Independent Electoral and Boundaries Commission (IEBC) cobbled jointly by all political parties in the country to oversee a free and fair election in 2022, he will score highly since it will show his seriousness in slaying the dragon of electoral injustice.

He holds the steering wheel of the handshake which has offered him a new lease of life while in office for a second term. He continues to experience less criticism since the political opposition supports his agenda. The buck, therefore, stops at him to clamp down dragon of tribalism, corruption and open doors for a free society devoid of favourism and inequality.

It’s notable that in the spirit of the Handshake, Kenyans expected the President to bring on board technocrats to reshape the operations of his government irrespective of their political persuasions.

As the adage goes, “a good name is better than riches.” The good you do in life to rekindle hopes, share kindness and mercy will determine the immortality you will leave and will define quality and not quantity that one is remembered for.

Almost 100% of Raila’s supporters at home and abroad are optimistic that the President will reciprocate by rallying his base to support Raila’s Presidential quest in 2022.

The supporters contend that, since the ODM leader is the most betrayed politician in the country as a result of electoral injustice, it made him the biggest casualty in taking the leadership mantle of Kenya.

The real meaning of the truce (handshake) is viewed as payback time for Raila.

Raila’s supporters are often in a quandary as to why the chairman of the IEBC Wafula Chebukati, who mismanaged the 2017 election is still in office if indeed the Handshake was arrived at to address electoral malpractices.

The beauty of a lasting legacy

The legacies of the late Nelson Mandela of South Africa and Martin Luther King Junior of the United States is unparalleled. In Kenya, the late Tom Mboya, Masinde Muliro, JM Kariuki, and Chelagat Mutai, will forever be remembered for their struggle for Kenya’s freedom, fairness and an inclusive government.

Heroes and heroines never fade from people’s memories when they pass on. ODM leader Raila Odinga, Gitobu Imanyara and James Orengo, to mention but a few remain living agents of our freedom.

Mother Theresa is immortalized for her service to the poor, Nelson Mandela and Martin Luther King for their bravery in the quest for emancipation of their people from injustices.

Activist Boniface Mwangi, once said that long after one is gone, he or she can only be remembered by deeds and not the net worth.

The late Dr. Myles Munroe, of the Bahamas Faith Ministries while on a visit to Kenya before he died in a plane crash, said on the Jeff Koinange shows that Kenyans are blessed to have a President from an affluent family. Mr. Munro was optimistic that with self-reliance, Kenyatta, will fight graft with more zeal.

As the 4th President of the Republic of Kenya, President Kenyatta has got room to define how Kenyans and the world will remember him. Just as God looks at our deeds, fellow human beings watch our steps too. When the good outnumbers the bad, you leave a legacy.

It’s imperative that the President keenly focused on his legacy. Leading a country for a decade and fail to put up structures that future generations will remember you for either in verbatim, written, and oral will be tragic for Kenyatta.

Nyaringo is the President of Kenya Patriotic Movement, a diaspora lobby based in the US

Sad: 14 points Why Kenyan Ladies End Up Single For Life