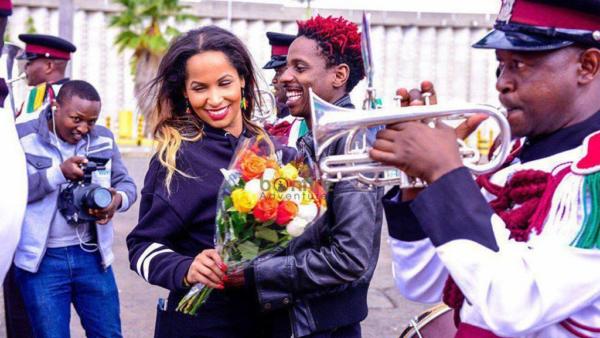 According to the comedian , the break up with his fiancee on the internet was stage managed and not what people presumed it to be.

Omondi has insisted that the two did not break up and neither did they separate. He has said that they were just in different countries hence could not be together as often as they wanted, but they are still together.

In an interview with Rembo Tv, when asked about his fiancee and what happened in their relationship, Omondi said that they were very much together and the lass was coming over to Kenya in December for the Christmas holidays.

“Chantal and I never broke up and neither did we separate. If you read what I wrote and what she wrote, she was going to school had to handle other life things. We are not even on a break and she is coming over to Kenya for Christmas,” said Eric Omondi.

Omondi went on and talked about his favorite things to do, stating that he was the best comedian in Africa not because he was the funniest person but rather because he is the most hardworking and has put in a lot of effort to build his brand over the years.

“I am not the funniest person in Africa, I am the best comedian and there is difference. This means that I have put in the work. There are other comedians that are very funny but are not doing enough in terms of hard work,” said Omondi in reference to his winning the best African Comedian title at the  African Entertainment Awards USA (AEAUSA) held in New Jersey.

Omondi and Chantal were dubbed ‘couple goals’ due to their theatrics and staged stunts to appreciate and show romance to each other publicly.

Sad Story of Eric Omondi: I lost both parents, grandparents…

Their alleged break up posted on the social media pages on 22nd May 209 ignited mixed reactions as the duo was dubbed as perfect and termed ‘couple goals’.

Omondi stated that he had separated with the Italian girlfriend, although insisting that they were still good friends.

Chantal responded and affirmed the separation, a move that threw the internet into a frenzy, with Kenyans asking for Omondi’s forgiveness on his behalf just so that the two can be back together.

A few months later, pictures of Omondi and TV girl vacationing together with their son raised more eyebrows, with Omondi insisting that they were just co-parenting.

With the new move, Omondi has proved that the break up was staged despite taking an emotional toll on majority of internet fans, commonly known as ‘Instagram in-laws’ who had invested  a lot into the relationship.