Leaders backing the unity between President Uhuru Kenyatta and opposition chief Raila Odinga dominated speeches during the public launch of Building Bridges Initiative report at Bomas of Kenya in Nairobi. 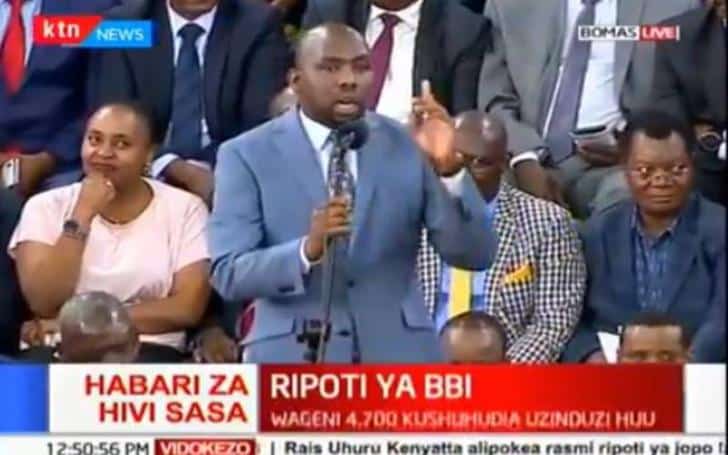 Elgeyo-Marakwet Senator Kipchumba Murkomen was heckled when he said the Tanga Tanga team allied to Deputy President William Ruto had been sidelined.

It forced BBI taskforce chairman Yusuf Haji to intervene to calm down the delegates who were shouting at Mr Murkomen.

Apart from some members of the BBI taskforce who explained the report to the more than 4,700 delegates from all the 47 counties who attended the event, Suna East MP Mohamed Junet stole the show as he invited most leaders allied to President Kenyatta and Mr Odinga to the podium.

Members of DP William Ruto’s Tanga Tanga brigade appeared lost during the fully-packed event at the auditorium that attracted applause from participants and streamed live in most local television stations.

The pro-President Kenyatta and Mr Odinga allies praised the BBI report that had received lukewarm support from the Tanga Tanga group before it was presented to the two leaders on Tuesday.

The Tanga Tanga group has since changed tune and has shown support for the report saying it captured the ‘thinking’ of Dr Ruto and reflected the Jubilee Party manifesto.

The report, the group said, did not promise a political Tsunami as earlier warned by Mr Odinga.

The Tanga Tanga group, a faction in Jubilee Party, had threatened to campaign against the report if it did not address the interest of Kenyans.

Contrary to what had been anticipated that the report would propose formation of a powerful prime minister post with speculation that President Kenyatta would go for it when his second term ends, it envisages a ceremonial PM.

A jovial President Kenyatta, watched and times chatted with Mr Odinga and Dr Ruto as the event progressed.

Mr Haji vouched for the implementation of the report saying it should not be neglected like those of other past committees.

The BBI is a product of President Kenyatta and Mr Odinga’s handshake after a disputed 2017 election which was disputed by the former PM resulting to instability that nearly brought the country to a halt.

The 14-member BBI team that went round the country collecting Kenyans views had sought to address all issues identified as key in helping ensure a stable and united country.

The nine points contained in a joint communique issued by the President and Mr Odinga after their political deal on March 2018 included ethnic antagonism, lack of a national ethos, inclusivity, devolution and divisive elections.

Others are security, corruption, shared prosperity and responsibility.