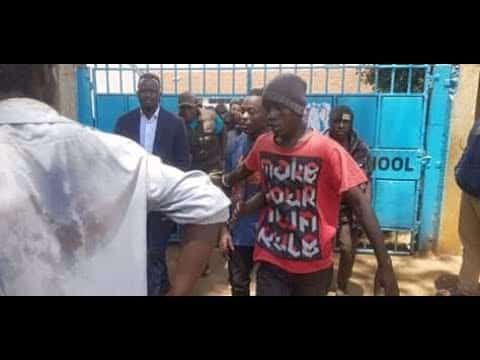 VIDEO: Gunshots fired as Mariga is Chased From Kibra Polling Station: The situation at Kibra constituency turned chaotic on Thursday, November 7, after Jubilee candidate McDonald Mariga was chased away minutes after he arrived at a polling station.

In a video that has since gone viral, the Jubilee Party Kibra candidate arrived at Ayany Primary School Polling Station reportedly in the company of police, however, residents at the polling station shooed him away.

The situation took a rather ugly turn as police were forced to shoot in the air to disperse the rowdy crowd.

Mariga’s luxury SUV (Hummer) is seen being swiftly driven off closely followed by the rest of his entourage.

Earlier on, Mariga had visited Lindi Mosque Polling Station and had received a warm welcome.

ODM’s Philip Etale who also shared the misfortune on his Facebook mocking Mariga by referring to him as a goon.

“Mariga goes to Ayany Primary School polling station in the company of police officers in Subaru SSD 131F white in colour and GD12MDX Subaru green in colour. Immediately he enters, the officers start shooting in the air. Mariga is a goon,” he posted.

In another video that went viral Mariga could be arriving at a polling station in his expensive H2 Hummer amidst jubilation of the residents.

Some could be heard challenging him to alight from the high-end car and finish the rest of his journey on foot like the fit former soccer star he is to which he obliged.

On alighting, he freely interacted with the crowd next to Kibera Secondary School’s signpost.