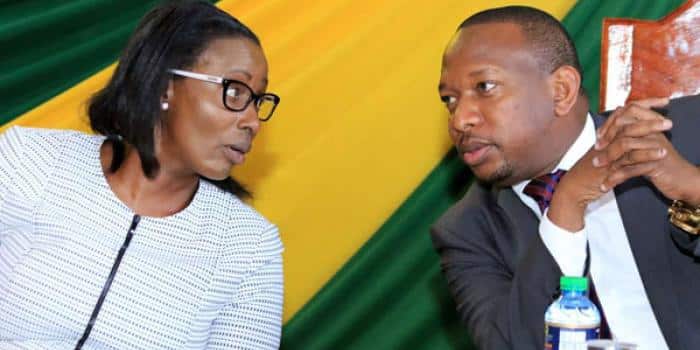 Nairobi Governor Mike Mbuvi Sonko on Wednesday, December 18 moved to court in a bid to bar county assembly Speaker Beatrice Elachi from assuming any functions of the governor’s office.

In a report published by Citizen TV, the governor through lawyer Harrison Kinyanjui filed a certificate of urgency arguing that no vacancy had constitutionally arisen in the elected post of Nairobi City County Governor to warrant the Speaker’s assumption to the corner office.

The governor further argued that at the time the order was made, he was in the process of appointing a Deputy Governor to help him run the county only to be cut short by the litigation process.

In the application, Governor Sonko’s lawyers also requested the courts to review the bail terms earlier set for his release.

Sonko also faulted orders to have him escorted to the Office of the Nairobi City County Governor and remove his personal items.

According to the lawyer, barring him from office was unlawful and amounted to an order directing him to vacate the elected post.

This came hours after Sonko skipped a court session, where his lawyers indicated that the governor was not in good health

The case was allegedly postponed at the Voi law courts due to the governor’s health complications.

Sonko’s lawyers claimed that the governor was still under medication following the altercation that occurred between him and police officers during his arrest at Ikanga strip.

In an article done by Citizen TV, Sub-article 5 of Article 182 of the Constitution provides that in the event of the vacancy of a governor and deputy, an election shall be held within 60 days after the Speaker assumes office.

However, in Sonko’s case, the Speaker’s ascension will not be out of vacancy but inability to act caused by a court process.

In July 2019, Kiambu Governor Ferdinand Waititu was barred from office in the same circumstances, leaving the county in the hands of deputy governor Dr. James Nyoro.

The same case applied to Samburu Governor  Moses Lenolkulal in April 2019, afterJustice Mumbi Ngugi ruled that governor Lenolkulal should not be allowed to access his offices unless he gets written permission.