Baringo Senator Gideon Moi left mourners in stitches as he told jokes about how he was branded a fake doctor.

Gideon said for the entire time his late father Daniel Moi was admitted at the Nairobi Hospital, he got so used to medical terms that he could prescribe medication.

“Your excellency, all this time, I have known so many medical terms that I have been branded a fake doctor,” he said.

(Like now I can look at you and prescribe five milligrams of a certain medicine, the Deputy President maybe I prescribe prayers, the speaker he needs to stop what he is consuming). 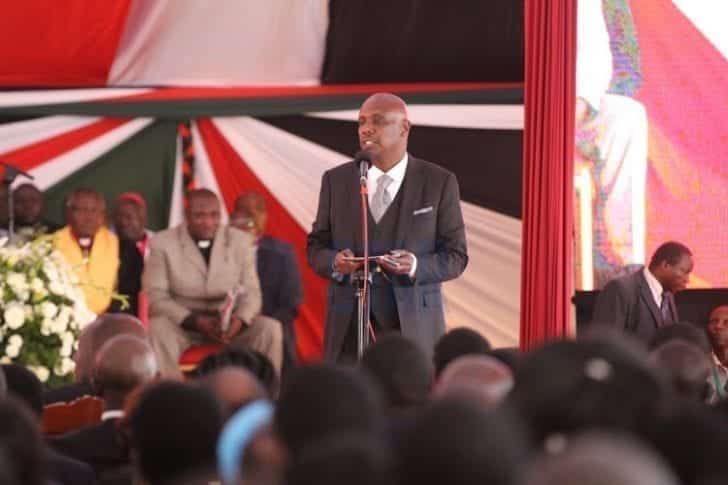 On Tuesday, Gideon also cracked a joke that left the congregation in laughter during the memorial service of his father at Nyayo Stadium.

He said the medical team at Nairobi Hospital had committed themselves to ensure Mzee Moi was comfortable.

“They did magic for Mzee. We were admitted on October 10 last year. We were shortly discharged but we got admitted again until February 4, 2020 when dad passed on. All this time, they gave him comfort, care and respect and we are grateful for that,” he said.

Gideon said for all the four months, he would spend time with Moi in the morning, leave shortly and join him later in the evening until midnight.

“My words are not enough to express collective family gratitude, we are just grateful for  your comforting messages,” he said.

Gideon said as a family, they are deeply touched with the outpouring of love and respect Kenyans have shown their late father.

“Losing a parent can traumatising and emotionally draining, but according Mzee a state burial allowed us to reflect on his life and as a family we are overcome with joy,” he said.

WHY DON’T YOU CARE? Sometimes I wish everyone cared