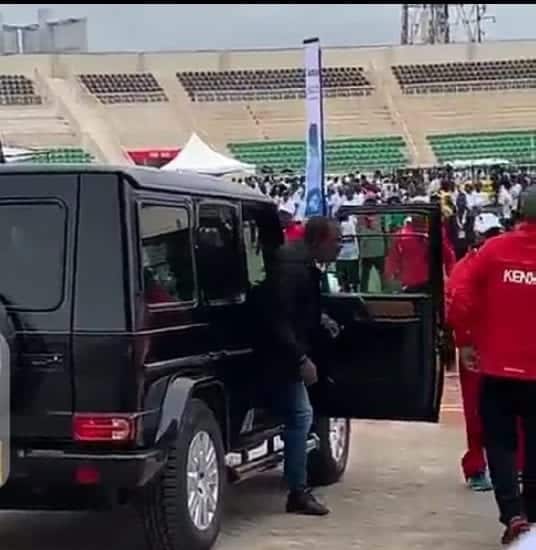 President Uhuru Kenyatta on Sunday, March 8 caught a number of Kenyans by surprise as he drove himself to the Nyayo Stadium for the Beyond Zero Half-Marathon, an initiative of First lady Margaret Kenyatta.

The President arrived in his Mercedez Benz G-Wagon, with the SUV positioned at the front of his convoy as his security team ran beside the vehicles.

A seemingly jovial Uhuru proceeded to get out of the vehicle before greeting and shaking hands with several Kenyans who took part in the half-marathon.

Alongside other leaders including Nairobi Governor Mike Sonko and Health Cabinet Secretary Mutahi Kagwe, Uhuru then flagged off the main race and continued to greet participants before taking part in a special 2-kilometre run. 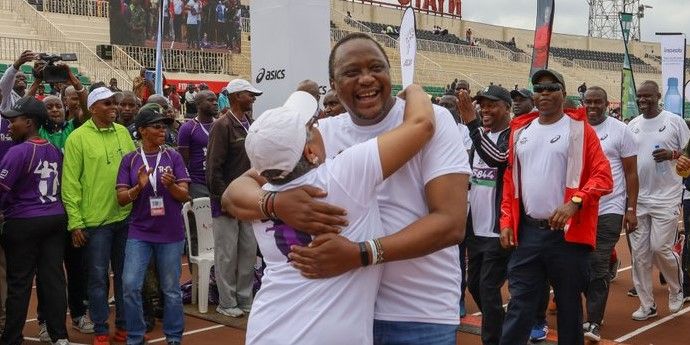 President Uhuru Kenyatta embraces his wife Margaret after completing his 2km run at the beyond zero half marathon on March 8, 2020.
PSCU
Related Posts
NEWS

Running in a white t-shirt and blue jeans, Uhuru finished the run in a time of 30 minutes and 50.1 seconds.

After the marathon, Uhuru spent his afternoon at the Kasarani Stadium watching the Mashemeji derby as Kenya Premier League (KPL) champions Gor Mahia beat their long-time rivals AFC Leopards by a goal to nil.

Uhuru was accompanied to Kasarani by State House Comptroller Kinuthia Mbugua and his son, Muhoho Kenyatta.

He sat next to Orange Democratic Movement (ODM) leader Raila Odinga in the VIP section for the duration of the game, with the duo pictured sharing hearty laughs throughout the game.

The President has in recent weeks been seen regularly mingling with Kenyans, with an apparent decreased regard for protocol.

On Friday, March 6, he surprised Nyeri residents after making an impromptu visit to inspect the ongoing rehabilitation works on the Nanyuki-Nyeri-Karatina railway line at Chaka Market.

The President engaged in short conversations and shared niceties with the visibly surprised area residents and traders at the market.

He was accompanied only by Kenya Defence Forces (KDF) chief Samson Mwathethe and Kieni MP Kanini Kega, with all other leaders in the region reportedly kept in the dark about the visit.

On Thursday, January 16, Uhuru also made a surprise visit to Barkra Hotel in the Mombasa Central Business District (CBD) for lunch.

He was accompanied by other leaders including Mombasa Governor Ali Hassan Joho.

Uhuru’s visit surprised Mombasa residents who rushed to greet him as some chanted slogans declaring their support for his presidency and the Building Bridges Initiative (BBI).

Uhuru also drove himself to the Nyayo Stadium in Nairobi on Sunday, February 9 to inspect preparations for the National Memorial Service that was held following the death of former President Daniel Arap Moi.

Watch a video of Uhuru driving himself to Nyayo Stadium on Sunday, March 8 below:

Watch a video of Uhuru mingling with Kenyans at Nyayo Stadium below: