“I am not only referring to the video, which is already in our possession but we also are tracking down any fake news and alerts being issued in the public,” Oguna declared, further reiterating the government’s stance.

A woman accused of having Coronavirus COVID-19 has spoken out in a viral video, responding to claims that she was infected.

In various posts shared on social media, a number of people wished her well and quick recovery, forcing her to respond to the pages, affirming that she was well and with her family. 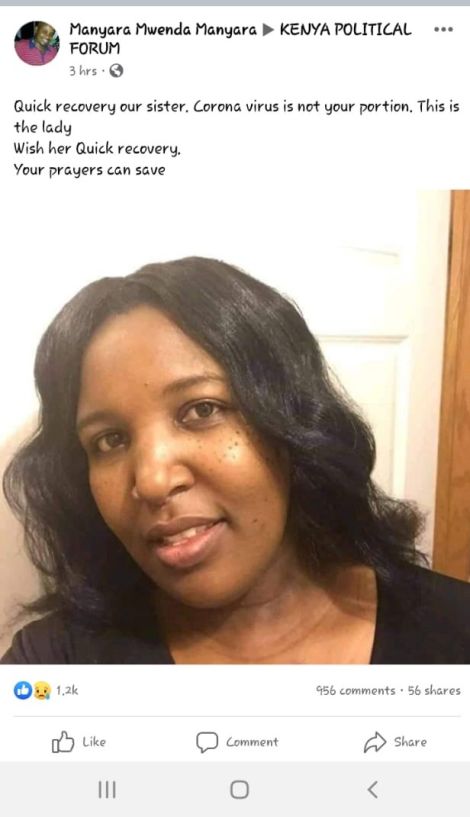 On Friday, March 13, the woman who identified herself as Jen (Jennifer) argued that she did not have the disease, noting that the government had warned Kenyans of sharing and posting fake news.

“I would like to caution anyone who forwards and shares fake and false messages. Remember that if you are caught, you will be jailed or would face a fine,” Health CS Mutahi Kagwe stated on Friday, March 13, after confirming Kenya’s first coronavirus patient.

In the recorded video, Jane enjoyed a light moment with her son and her driver.

“Stop sharing all the propaganda. We don’t have any Coronavirus. I recently travelled to Kitale. I did not use public transport, I used a private jet.

“All the time I was in Kenya, we used my father’s vehicle. We also went to Keiyo, Eldoret and flew back to Nairobi. We were screened on our arrival and tested and we are good. We love you all,” the woman clarified.

Citizen TV, on Saturday, March 14, also thwarted claims that it had issued an alert for a second case of coronavirus. The fake alert stated that a Multimedia University student had tested positive, infecting over 1,000 other students.

Kenya Airways also spoke out against a fake news post claiming that the lady who the government isolated after she tested positive, was aboard the agencies plane. The post further claimed that the government had lied to Kenyans, revealing fake details about the woman. 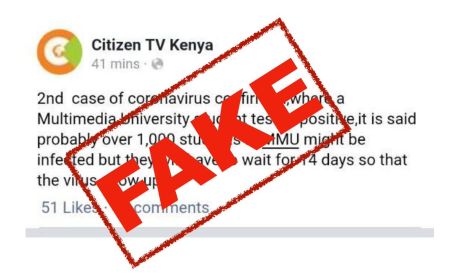 “The passenger was not on board any of our services. Do use social media responsibly and refrain from sharing false or unverified information that may cause unnecessary panic,” Kenya Airways tweeted.

On Friday, March 13, Kagwe assured Kenyans that the government had responded adequately to the first case, where a 27-year-old woman was isolated after landing in Kenya from London.

The ministry also traced all individuals who came into contact with her and later visited her home where they reportedly isolated over 10-15 men who were using her Ongata Rongai house as an office.

“We really want to thank this lady because the moment she felt slightly unwell, she took herself to hospital. She also gave a list of all the people she was in contact with since arriving, as well as their contacts, We have a response team that is tracking down all those people including all the passengers who were in her flight. They will be monitored for 14 days and subjected to quarantine and quarantine is not a request it is a must – if you do not self-quarantine, we will have to take you to a controlled facility.

“I would like to add, however, she is stable, her temperature has gone down to normal, she is eating. She cannot be released until she is confirmed negative. She is okay. Therefore, there is no need for alarm in our nation. The government commits to strengthening measures to prevent transmission of the disease,” Kagwe stated. 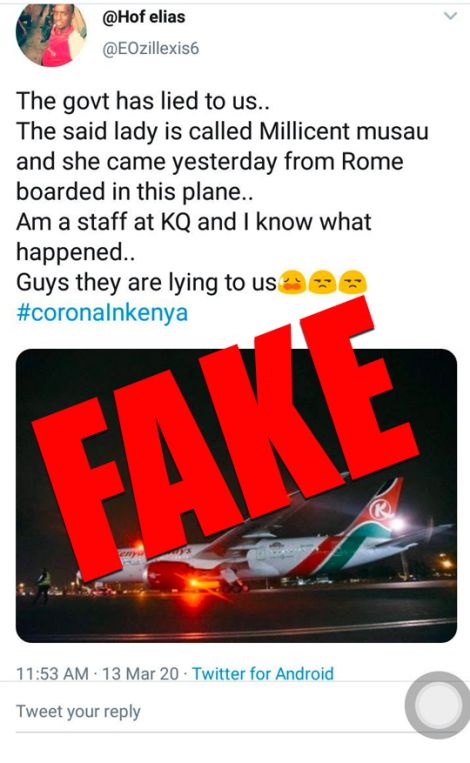 The government also asked Kenyans to maintain hygiene and adhere to measures set up to prevent an outbreak of the disease. It also banned meetings and issued directives on travels outside the country.