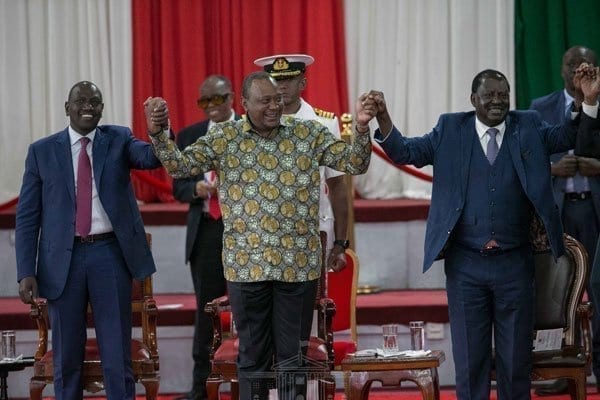 President Uhuru Kenyatta and Raila Odinga are working on a line-up that could see their parties — Jubilee and ODM, respectively — produce a single presidential candidate in 2022 election.

The plan includes independence party Kanu, with its leader Gideon Moi set to get one of the top three positions of the new alliance, according to an ODM insider.

He said the three parties are yet to agree on how to share president, deputy president and prime minister posts, with Mr Kenyatta set to name his heir should he choose to retire from active politics.

The development comes a day after it emerged that the two leaders are working on a plan to form a government of national unity after the current coronavirus crisis.

The Nation has established that it is this reality that has created a fierce battle for the control of Jubilee between the president and his deputy, Dr William Ruto.

Mr Odinga has stated that the party’s focus after the Covid-19 pandemic will be a referendum to bring changes in the country through the Building Bridges Initiative (BBI).

And on Sunday, a senior ODM official confided to the Nation that they “want a fully restructured Independent Electoral and Boundaries Commission (IEBC)” through the BBI.

“ODM is pushing for an Inter-Parties Parliamentary Group (IPPG) akin to the one in 1997, where political parties had the free hand to select commissioners of the electoral body,” the official, who sought anonymity, said.

“With this, we are confident that the opposition’s unity with the president will lead to a fair process of appointing the officers to run our election in 2022.”

He said the deal was the reason Dr Ruto is fighting to wrest Jubilee control from the president and block Mr Kenyatta from actualising such a deal.

“To him, that is the only way of preventing Uhuru backing ‘Baba’ with Jubilee.”

Jubilee Secretary-General Raphael Tuju did not confirm the 2022 plan but noted that BBI was an initiative dealing with many issues and the “common thread is inclusion and fairness”.

“Two years ago, there was a good number of Kenyans who were entertaining calls for secession because they saw no hope in a future Kenya because, as it was constituted, there was a huge population that was feeling disenfranchised,” he told the Nation.

“So the common thread of fairness and inclusion is what underpins the structure that we would want from the BBI.”

“Tough times call for tough decisions, and the country comes first. It is not a promissory note on anybody; it is a question about what the generation we are mentoring think of us,” he said.

“Will they think we were selfish to let the country fail, or will they say we made the right decision to unify the country? The unity of the country is more important to us at the moment. It is about the country and the future, nothing more,” Mr Salat said.

He went on: “As the independence party, how can we run away from standing with Kenya?”

Wiper Party Vice-Chairman Mutula Kilonzo Junior seemed to welcome the idea, saying since Kenya is likely to face many challenges post Covid-19, “the least the country needs is high octane and divisive politics”.

“The succession of the president is key to stability post 2022. A government accommodating all shades of opinion is welcome, and I support the idea,” Mr Kilonzo told the Nation.

Ford Kenya Secretary-General Eseli Simiyu said he is not against the coalition between Jubilee and the opposition, but is concerned whether it would enhance the required unity.

“They need to think through it very carefully because the handshake team is also not inclusive. If their intention is to heal the country and bring it together, then they have to really think through what they are doing,” Dr Simiyu said.

“Anybody who wants to join that bandwagon must ask themselves this question – do they want to sanitise the ills of Jubilee before the next election?”

Kimilili MP Didmus Barasa said decision-making in Jubilee is by party organs and not an individual; hence, any calls for a coalition must be based on the party’s constitution.

“The contrary would mean Jubilee Party is a private entity. An individual can only initiate an opinion to a party organ and thereafter either be adopted of rejected,” Mr Barasa said.

The DP has also warned Jubilee members against what he termed as “ethnic coalitions.”

The party, he noted, has no room for “selfish evil experiments meant to benefit brokers and their ilk”.

But on Sunday, Cherangany MP Joshua Kutuny questioned the DP over what he termed as double speak.

“Why the double standards. All along he has been saying that he supports the president. He is on record stating that any decision made by the president is for the interest of the nation and the party. So when did the president become an individual in this case?” he said.

Mr Kutuny said Dr Ruto’s defiance would not, however, stop the agenda.

He said President Kenyatta has the numbers to effect any changes in the party, noting that “even the purported legislators who signed the 146 protest letters to the registrar of political parties protesting against the list of NMC officials, we have 80 who have distanced themselves from the purported signatures”.

“They have communicated; we have their numbers and names, and we are engaging actively. They have said clearly they were not part of that scheme” Mr Kutuny said.

“The way they forged alleged assassination documents, and hacked the president’s Twitter account, is the same way they pasted the signatures of the alleged MPs,” he added.

Nyeri Town MP Wambugu Ngunjiri said “Ruto is trying to run a coup against Uhuru in the party”.

“The party gives Uhuru power to initiate anything that will take the party forward including a coalition. Once he’s started the process, the NDC will ratify. The same way he initiated the handshake with Raila,” Mr Ngunjiri said.

Secretary-General Barrack Muluka said “it’s raw political greed for power”. “It defeats the essence of multiparty democracy. It’s a bad excuse to access what we should get through the ballot. I don’t think that the country has a unity crisis. In politics, some people should be in power and others in the opposition,” Mr Muluka said.