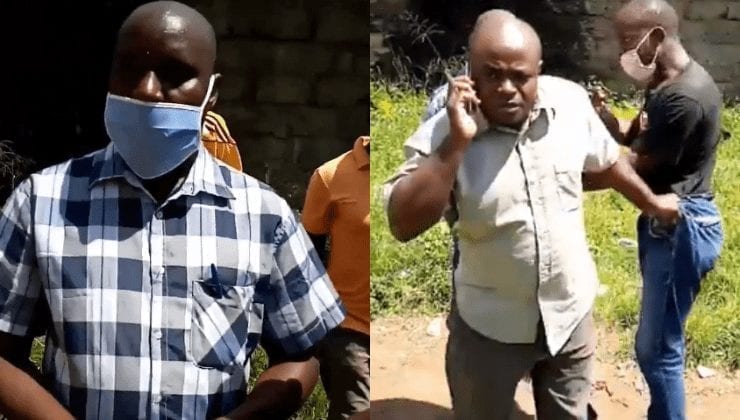 Two plain-clothed police officers caught on video reportedly arresting a man for allegedly not wearing a face mask when one of them also did not have his on were forced to release him after members of the public protested.

The unidentified cops, in the 45-second video shared by Twitter user Nelly Apolo, are seen manhandling the individual who can be seen with a mask on.

One of them is seen placing him in handcuffs while the other – who is also engaged in a phone call – grabs him by the waist.

A section of enraged members of public however surround them within no time and demand the release of the man while criticizing the hypocrisy of one of the officers who also does not have a mask on.

The said officer then lets go of the man and steps aside while hurriedly taking his mask out of his pockets and putting it on but by then its already too late.

The civilians, most of them presumably boda boda riders going by their reflector jackets and helmets, continue to demand the release of the man and encircle the officer holding him in cuffs.

After a few minutes, the officer uncuffs the man and lets him go as members of the public cheer.

The civilians’ action has since elicited joy from Kenyans on Twitter who commended them for not bowing down to injustice.

Citizen Digital can however not independently verify if the arrest had anything to do with not wearing a face mask which is an offence.

Video:KQ’s new Dreamliner spotted in US

Why Uhuru reached out to Russian counterpart Vladimir Putin

ICC:MPs Plan to pull Kenya out of Rome Statute