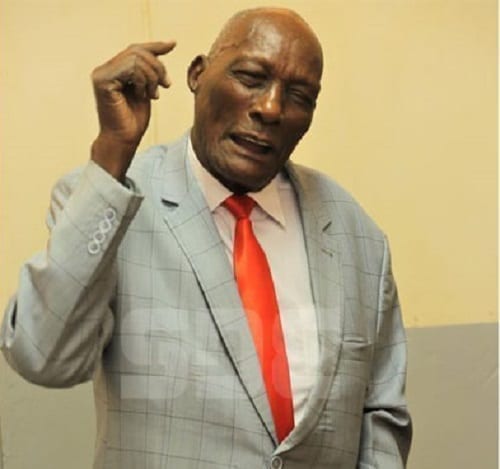 Veteran politician and Uasin Gishu businessman Jackson Kibor has vowed to have DNA tests conducted on his six sons to ascertain if they were ‘were truly his blood’ before they can inherit his property.

Kibor, 88, won a court battle against his sons for the ownership of some 1,250-acres in Soy Sub County, Uasin Gishu County.

He had moved to court in 2016, to block the transfer of the multi-billion property to his sons over what was described as an unresolved family dispute over ownership.

Kibor had also claimed that some of his employees were illegally registered as proprietors of the land.

Last week, Environment and Land Court Justice Antony Ombwayo ruled that Mzee Kibor was the legal owner of the land and that his sons and employees did not have valid documents to claim the ownership.

“The upshot of the above is that the plaintiff has proved his case on balance of probability and I therefore do declare that he is the rightful owner of the original parcel known as LR No 8300 and 8301(lR 16815 and LR 16896/1) and therefore an order directing Uasin Gishu land registrar to nullify and cancel purported unlawful and illegal consolidation and subdivision of the land as well as issuance of title deeds to defendants,” ruled the judge.

The court further directed affected employees to vacate the land within a period of 150 days failure to which they will be forcibly evicted.

However, the court ruled that Kibor’s sons will remain in their father’s land.

“The 11th to 15th defendants and the 18th defendants are the sons of the plaintiff and therefore, I decline to order their eviction,” stated the ruling.

The virtual ruling was made from Kisumu.

Kibor’s sons- Elkana Kipleting, Evans Kipkosgei, Eric Kipchumba, Raymond Kibitok and Edwin Kipkoech, were the defendants in the case. Their father had accused them of fraudulently subdividing the land.

Speaking to The Standard after the ruling, Kibor claimed that the five were not his sons and that he intends to have DNA tests conducted to confirm or rule out his fears.

Kibor who divorced Naomi Jeptoo in December 2018 and now says that her sons, who he had sued, are not his.

“I never married Jeptoo. I doubt her sons are my biological sons and will have a DNA test conducted to prove that they are indeed my biological children before sharing to them my property,” he said.

Kibor managed to convince the court to strike out documents showing that the land in dispute was transferred to his sons.

While testifying, one of the sons, Kibitok, told the court that he was allocated 250 acres by his father and that the sub-division was done on December 2, 1994 in presence of a surveyor.

He said Kibor also allocated 20 acres to Samitoi Girls Secondary School, an acre to Seiyo PMCA Church and 22 acres for the construction of a dam.

Another son, Ezekiel Kibor, said his father attempted to shoot him when he (Kibor) found him ploughing part of the disputed land.

“It is unfortunate that my father has changed tune after giving us our lawful inheritance by going to an extent of ordering my driver and workers to vacate the land,” the son told the court.

Back in 2017, Kibor, a licensed gun-holder, denied threatening to shoot his son. Instead, he accused his son of attempting to attack him with a machete.

“This boy is conman lying to court since I only removed the gun because my life was in danger as he attacked me while armed with a machete. I reported the matter at Soy police station,” he told the court which later acquitted him.