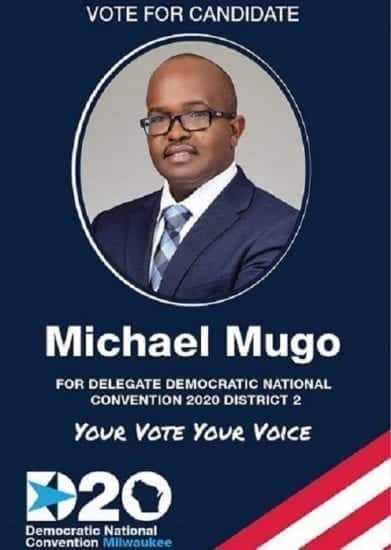 A Kenyan man Michael Mugo of Baltimore County Maryland is running to be a delegate in the Democratic convention in Milwaukee which will be held this year August 2020.

According to Michael, running to be a delegate is a small step in his journey to a political world in the United States of America. It is a journey he cannot make it on his own and he is asking for support from his family and friends. He believes that his dream will not be possible without support especially from the Kenyan community. His motto is “Nothing will change if we do not change it”

Michael Mugo has filed  the necessary documents and paid the required fees to appear on the 2020  Presidential Primary Election Ballot as a candidate of Democratic Party for male delegate to the Democratic National Convention in Congressional District 2.

This is what Michael said as he announced his intentions:

“It’s always impossible until it’s done! A little over a month ago I stepped up to run for delegate to the convention in District 2. I pitched my tent in Mayor Pete’s Camp. I knew he was a long shot but his youthfulness, resume, charisma and courage inspired me. He may not be in the running but the issues he stood for are. So we must continue because quitting is not in the cards”.

Michael is not running as a Kenyan but as a citizen of this great country of United States of America. he will however be representing in many ways the great country of Kenya and it’s People. Good lack and God bless Michael!!

Drama As Miss Tourism Takes The Battle To Court

Positive Thoughts-Every friend says, “I too am your friend” but