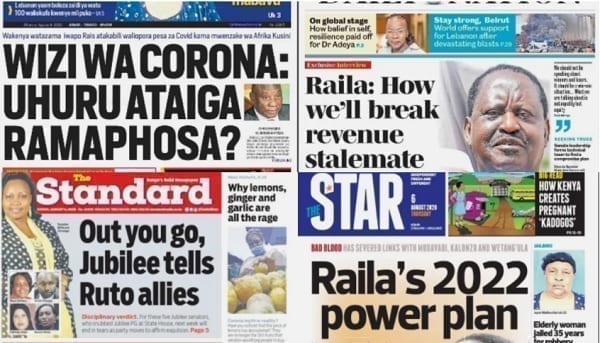 Kenyan Newspapers on Thursday, August 6, report on plans being laid by the senators to unlock the revenue sharing impasse that flopped in the Senate for the seventh time on Tuesday.

Other stories given wide coverage is the race to the 2022 General Election that is steadily gaining steam and the killer blast in Lebanon which has affected section of Kenyans living in Beirut.

ODM leader Raila Odinga’s bid to clinch the presidency stares at a rocky future if his handshake with President Uhuru Kenyatta will flop as section of observers have foreseen. According to The Star, Raila has since 2007 fallen out with key allies who would have bolstered his 2022 bid in case they were still in the same team to date.

Some of the political heavyweights Raila has fallen out with are Wiper leader Kalonzo Musyoka, FORD Kenya’s Moses Wetang’ula and Musalia Mudavadi of the Amani party.

Kenneth is also being fronted by a section of central leaders as the next Mount Kenya kingpin.

Operations in courts across the country are almost grinding to a halt after some 200 prosecutors tested positive for coronavirus.

The COVID-19 positive results have caused DPP Noordin Haji to scaled-down operations at his office located at the NSSF building, Kibra, Milimani and Makadara law courts.

The Kakamega law court has also been shut after several prosecution counsel tested positive for the virus. Among cases that are staring at a stall are murders and those related to graft.

The positive cases among Haji’s staff were identified following mass testing conducted in the department.

Video: DP Ruto teams up with Mudavadi & Wetangula to…

Top officials in the Jubilee Party have finished their investigations into five nominated senators who snubbed President Uhuru Kenyatta’s meeting with party senators at State House in May.

What now remains is for the party leader, Uhuru, to convene a meeting that will decide whether to expel or retain Millicent Omanga, Alice Milgo, Mary Seneta, Naomi Waqo and Falhada Iman.

Victor Prengei also missed the meeting but told the disciplinary committee he did not receive the communication due to poor communication network at his home. Observers believe the senators who are DP William Ruto allies, snubbed the meeting since it was aimed at kicking out Kipchumba Murkomen and Susan Kihika from the majority leader and majority whip positions respectively.

After the May meeting, some of them have been towing the party line but others are back in the DP’s camp. During the Tuesday, August 4, senate sitting, Omanga, Waqo and Iman voted yes to a motion by Murkomen to adjourn the sitting. Seneta voted no while Prengei was absent.

The Senate has formed a nine-member technical committee that is expected to explore a compromise in the revenue sharing deadlock. The committee will be chaired by deputy speaker Margaret Kamar and is expected to forward its findings to Speaker Ken Lusaka either on Monday or Tuesday next week.

It will be retreating to Naivasha to kick off the discussions. The majority and minority parties are therefore expected to meet today and select their representatives who will take part in reviewing amendments made by the Commission on Revenue Allocation (CRA) and those fronted by individual senators.

Taifa Leo questions whether President Uhuru Kenyatta will just sit back and watch as section of government officials plunder COVID-19 funds or if he will stand up against the vice like his South African counterpart Cyril Ramaphosa.

Ramaphosa, according to the daily, has been cracking the whip on public servants taking advantage of COVID-19 to profit themselves. Among those he has punished include his spokesperson Khusela Diko who was ordered to step down after it emerged her husband was favoured and awarded a tender to supply PPEs.

In Kenya, such claims have erupted but Health CS Mutahi Kagwe was quick to refute some of them. Kagwe dismissed claims that some tenderpreneurs supplied the government with PPEs at exaggerated prices when the pandemic broke out stating at that time, the demand for the product dictated the high cost.

Meanwhile, Homa Bay senator Moses Kajwang’ has asked the senate committee on health to investigate the death of a Homa Bay nurse who succumbed due to COVID-19. Kajwang’ wants to know why Marriane Awuor was transferred to Kisii Level 5 Hospital yet she could still receive treatment at the Homa Bay Referral Hospital.