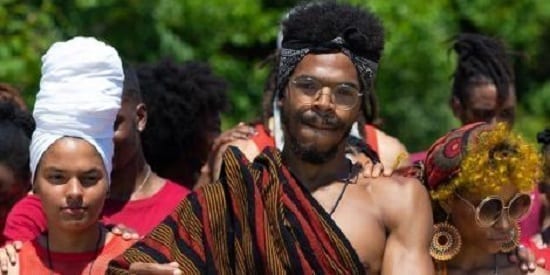 Responding to a question on Instagam on September 10, he stated that his parents did not name him Kamau on the basis of the Kikuyu cultural naming system, whereby one takes up names of their ancestors.

“I was given the Kikuyu name based on it’s meaning and my demeanor,” he explained. In Kikuyu culture, Kamau means Silent Warrior.

“I received my name after my parents and elders had gotten the chance to observe me for a bit,” the rapper from Brooklyn New York added.

In a past interview, he revealed that his heritage actually traces back to an assortment of West African tribes like the Tikar of Cameroon and Kru of Liberia.

Despite not being from Kenya, he visited the country in 2018 to perform at the Thrift Social concert.

Speaking about his experience, he explained that he felt as though he was home and not a tourist.

“I won’t be able to give an adequate answer to that question right now. I’m not even in that space because I’m not a tourist here. This is like my house. It doesn’t matter what anyone says,” he stated.

Kamau’s parents were keen on educating their children about African culture and even enrolled them into the Ujamaa Shule in Washington, which is described as the oldest completely independent African-centered school in the United States.

“My father and mother were born under English names. They wanted to change that trajectory of psychological slavery that’s present in almost every black home by starting with the names because sound is very important and what I answer to is very important.

The musician has received recognition for his song covers including those for Outkast’s Hey Ya and Adele’s Hometown Glory.