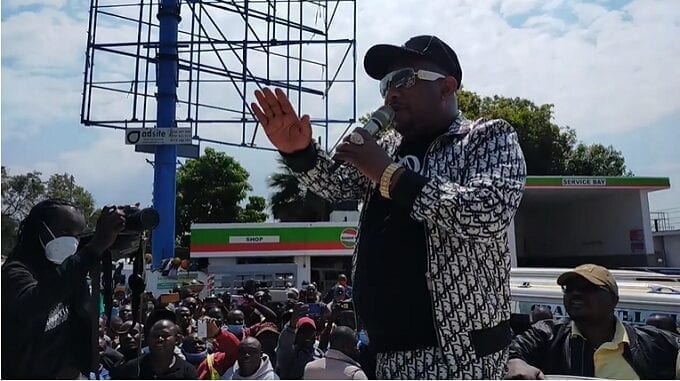 Nairobi Governor Mike Sonko was the talk of town in Kisumu on Saturday, September 5, 2020.

Governor Sonko was received in Kisumu Town by an overwhelming crowd that did not seem to care about social distancing or the use of face masks.

He also brought the funeral of the late Kevin Oliech, brother to legendary footballer Dennis Oliech to a standstill and gave away Ksh 100,000 after the ceremony.

The family of the departed thanked the governor for supporting them throughout the funeral.

“Thank you for the support you gave us when my brother died, you were there for us and even helped bring his body back from Berlin, Germany,” Sarah Oliech spoke at the funeral.

She slammed the media for antagonising the people against Sonko and not covering the good deeds he was doing in Nairobi.

Dennis Oliech notably took a back seat at the funeral and refrained from speaking.

In his speech after the burial ceremony, Sonko demanded Interior Cabinet Secretary Fred Matiang’i to resign.

He criticised that people were fronting him as a presidential candidate yet he had failed to keep the police in check.

“Nobody is above the law. If Matiang’i’s job is to supervise police brutality or ordering my arrest he should resign,” Sonko declared.

Reports that a section of leaders are planning to endorse the CS as President Uhuru Kenyatta’s successor have earned Matiang’i a bashing.

Deputy President William Ruto of Friday scoffed at the idea of competing against the Interior CS.

“They are meeting to strategise on my competitor in 2022. They have many potential candidates but they are still not confident about who can compete with me.

“They have thought about Raila Odinga but he is spent, they have thought about Gideon Moi but still not sure. They have approached Kalonzo, Mudavadi and even Matiang’i (laughs). They are struggling but I will just wait for them at the ballot,” Ruto mocked during a meeting with Kajiado MCAs in Karen, Nairobi.