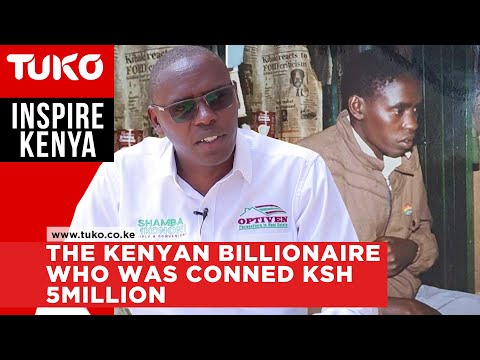 George Wachiuri is no stranger to poverty. It, however, remains the starting point that has shaped him into what he is now.

Born and brought up in the driest parts of Kieni, Central Kenya, Wachiuri’s childhood knew nothing but struggle. Speaking exclusively to TUKO TV, the CEO of Optiven explained it all began when his father died in 1978, leaving their jobless mother in charge of eight children.

“I remember when I was going through primary school, even paying KSh 20 was a problem for my mother, and many times I saw my mother cry,” he recalled.

Their daily routine involved tilling the land at the crack of dawn, attending school, then walking 10 kilometers every evening in search of water.

Starting The New Year Off Right With Optiven Group

“I remember in 1984 and there was this famine. We did not have anything to eat for five days,” he continues. For years, Wachiuri’s outlook on life remained convoluted, oscillating between hopelessness and myopic ambitions.

That would change when one of his brothers was called into secondary school and for the first time, he saw a sibling wear trousers.

“And I thought, wait a minute! It means if you pass you get good clothes. That one motivated me. It inspired me,” explained Wachiuri.

The turning point saw him excel in his primary school exams and get admitted to Chinga Boys High school before securing a place at the Kabete Technical Training College.

To keep him through school, neighbors and well-wishers from the village converged time and again to do fundraisers. It is the reason he is passionate about supporting students from all the counties in Kenya, something he does through the Optiven Foundation.

Wachiuri revealed five percent of all the money Optiven, his real estate company, makes, goes to the foundation. To top it up, 100% of all earnings from the two books he has authored goes the same direction.

But getting there did not just happen overnight. The path to greatness took shape when he got his first accounting job at Uchumi supermarket before moving up the ladder to work for World Vision Somalia and UN Sudan. When he resigned in 2008 to get into full-time business, he sunk his savings worth KSh 5 million into real estate. He was conned all the money.

The first is what he calls the 70-10-10-10 rule. What this basically means is that for every earning an individual makes, 10% should go to tithe, 10% ought to be invested, 10% sorts insurances then the 70% is left for spending.

The second, and which he learnt the hard way, was the need for contracts in business. It happened when he was involved in car hire business as a side hustle. “I remember one time my car was on TV. It was carrying opium.

The following day I was arrested and put in the cells. Thank God I had a contract, otherwise I would be in Kamiti right now,” he added.

The third and most important, which he never shies away from, is the need to include God in everything one does. He added that had it not been for God coming through when he was at his lowest, there would be no George Wachiuri right now.

Sonko says some MPs plan to lock him out of politics

HOW DONALD TRUMP FIRED 14 EMPLOYEES BECAUSE OF THEIR KENYAN DESCENT.