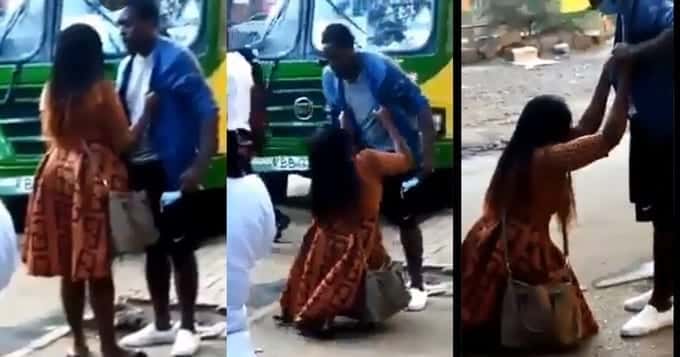 A video capturing a woman in a dramatic scene pleading with a man while on her knees at a bus station in the city has sparked a heated debate among netizens.

The woman has her hand clutching the man’s shirt. A few seconds into the video she kneels in front of the man pleading with him about something. The exchange of words between the two cannot be heard in the video clearly.

Kenyans on Twitter (KOT) appeared to deduce that the two might have been lovers and were having a quarrel that ended badly, especially for the woman.

A section of KOT could not understand why the woman would embarrass herself publicly in such a manner while others blamed the man for not being tactful in delivering ‘bad news.’

“As gentleman, I could not let her do this at all, it’s biblically wrong to let someone kneel in front of you. Second, ask yourself if it was your daughter, sister or mother what you would feel. Just pick her up, take her, go resolve this in private call her friend,” said @Jully Gun.

Woman claiming to be lover of Matungu MP stops burial over…

“Dear bros, never leave your woman or rather gf in this state. Just stay with her until she z comfortable enough kuachika. She will end up killing herself without second thought and you’ll never recover from this your entire life. It will haunt you forever,” commented @Ricoh_bea_254.

“So we waste our time entertaining their toxicity? If she is suicidal, that is on her… Guilty conscience is for those who have done the wrong and breaking up is not one of them… The queens just have to learn the easy/hard way… Ukiachwa achika!” said @real_lionaire.

Robert Alai: Prophet Owuor is a False & Evil Prophet,Causes Accident Whenever in…