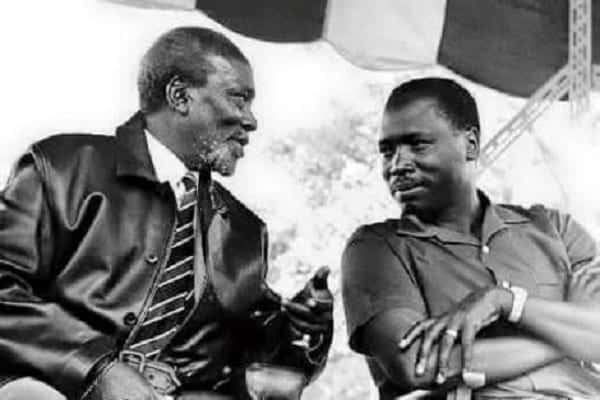 President Daniel arap Moi died on February 4, 2020, and so today marks the first anniversary since his death.

Moi who led Kenya from 1978 to 2002, was seen as both a unifying as well as a polarising figure especially by his critics who saw him as an authoritarian leader. Moi’s allies, on the other hand, credited him for maintaining stability in his 24 year rule.

Mzee was praised for embracing peace during his tenure, and was lauded for ensuring a smooth transition of power after being trounced in by the opposition in 2002.

Thousands of Kenyans from all walks of life gave their final respects in person when the body of the late President was placed at the parliament buildings. Proof that he was still revered by a good number of Kenyans.

He earned the sobriquet “professor of politics” but economic stagnation and accusations of corruption tarnished his legacy. Still, Moi was loved.

“I remember Moi as a great leader who offered me a bursary to complete my studies in high school,” a lady told the press after paying her final respects.

“We enjoyed [free] milk while in school. I will never forget him. He was a generous man,” said another.

President Moi had his shortcomings, as most of the leaders in the country, however, he also had a side of him that endeared him to many.

In 2004, the ageing leader asked for forgiveness from “those he had wronged”.

Here’s a look at little known facts about the late President.

Moi’s early business ventures included; selling animal skins and paraffin and running a posho mill and a general store in his home village.

The enthusiastic teenager had lofty ambitions of making a name for himself from a very young age.

Moi became a teacher at the Government African School in 1945, advancing to headteacher the following year at the tender age of 22.

After two other moves, he returned to Kapsabet in 1954 as a headmaster, where he remained until 1957.

In March 1957, Moi was one of the first eight black people to be elected to the Legislative Council.

Early in 1960, he was one of the African delegates to the Lancaster House conference in London, which drafted a new Kenyan constitution granting black people a majority in the Legislative Council.

At the end of the following year, when Mzee Jomo Kenyatta became President, Moi was sworn in as Minister for Home Affairs.

Unknown to most, Moi was big on fashion. How he dressed was not left to chance as it needed to portray elegance.

All his well-cut bespoke suits and colourful ties were bought at Saville Row in Mayfair, London.

To his aides, he was a teacher of good grooming.

Those who worked under him say during his reign and even in retirement, Moi wore “simple, but classic clothes that depicted the status of a Head of State”.

His suits were never complete without a fresh lapel flower. “The roses were part of his trademark, they put a fresh rose everyday and these flowers were picked every morning at the State House.”

In 2016, it emerged that Moi was the holder of ID number 1 in Kenya… quite literally.

The country was thrown into shock in 2017 when it emerged that Former Presidents Daniel Moi and Mwai Kibaki were blocked from voting in the General Election since their ID cards had been used to register other people.

On the other hand, Mr Moi’s ID number 0000001 – had been used to register one Joseph Marrion Nchabani, indicated to have been born on January 1, 1968.

His top 3 books were: The Holy Bible. The Prince by Niccolo Machiavelli and 48 Laws of Power by Robert Greene.

“Mzee Moi loved the church and he loved the Bible. He loved reading the Bible and as a result of this he instructed me to give his children, each a Bible during his funeral and that is what we will do,

“He also left specific words for me to read to his children and I will do that as we hand over the Bibles,” Retired Bishop Silas Yego revealed during the late President’s funeral.