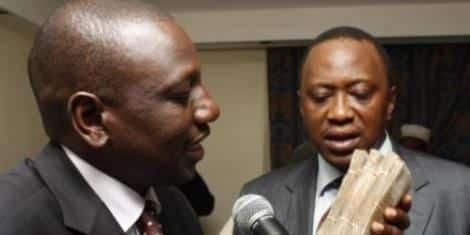 Politicians allied to Deputy President William Rutoare likely to go broke after the self-proclaimed hustler announced that he was slowing down his 2022 presidential bid.

The move, which came after President Uhuru Kenyatta discouraged early campaigns, has dealt a huge blow to MPs who have been going around the country with Ruto.

Nation reports that the politicians, who operate under team Tanga Tanga, have been making a killing out of the tours.

However, this will now be a thing of the past after the DP decided to put the brakes on his campaign.

The handshake between President Uhuru Kenyatta and ODM Party Leader Raila Odinga in March 2018, might have backed Ruto into a corner.

List of Under 30s Who Floored Kenyan Political Bigwigs in…

Ruto was seen to be against the handshake as he often castigated Odinga for trying to reap where he did not sow.

His stance caused a strain in his relationship with the president since the latter feared that politics might sideline the government’s agenda.

The dire situation forced Ruto to distance himself from politicians campaigning for him to be Kenya’s fifth president.

Some of the MPs who have now been left in the cold include; Didmus Baraza (Kimilili), Ndindi Nyoro(Kiharu), Kimani Ichungwa (Kikuyu), Aisha Jumwa(Malindi) and Suleiman Dori (Msambweni).

It is expected that the legislators will continue to drum support for Ruto, even without funding.