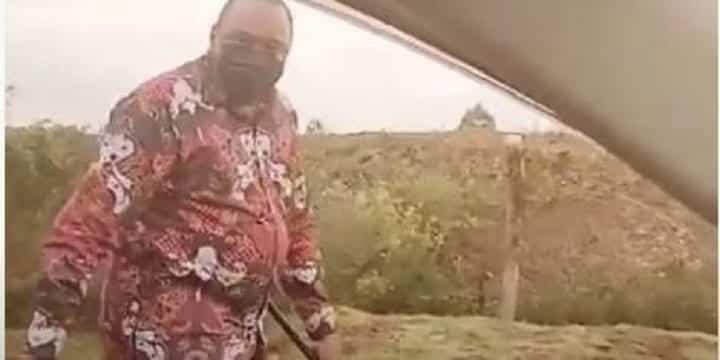 A video showing President Uhuru Kenyatta taking a walk along State House Road while holding what appears to be a cane has sent the internet into a frenzy.

The short clip, which was shared by popular Kenyan actor Pascal Tokodi, shows President Kenyatta strolling alone while dressed in a pair of black trousers, a flowery shirt, and a black face mask.

The video, posted on Tokodi’s Instagram page on Wednesday evening, has since garnered more 165,000 views. It was also shared countless times on other social media platforms.

Speaking to Nation, the actor described the moment.

Security detail
“I was driving along State House road and I saw the president walking and before I could have a chat with him, his security detail came and chased us away because we were holding traffic,” he said.

A hysterical Tokodi, who was in the company of a friend in the car, can be heard requesting the Head of State to watch a programme that he stars in.

“How are you sir…Oh my goodness. What! Have a good day. Ona Selina (watch Selina) Maisha Magic East,” an overjoyed Tokodi tells Mr Kenyatta.

The president is heard responding, “Asante. Nimeona.” He then waves Tokodi off.

The video has left Kenyans divided with some supporting the actor for “promoting his hustle” and others criticising him for not asking “more serious questions”.

On Twitter both “Selina” and “Pascal Tokodi” were top trending topics separately.

“Pascal Tokodi asked the President to watch Selina. He is an actor. That is his hustle. That’s a focused guy for me. Extra points for not begging for handouts. President was taking a walk. Even he needs a few minutes off Kenya’s woes,” he said.

Anita Wangari wondered why some Kenyans were against what Tokodi told the president yet they had voted for him thrice. “You voted thrice for Uhuru Kenyatta but Pascal Tokodi telling him to watch Selina is where you draw the line. Mlitaka aongee story za BBI na 2022 ama!?”

“Pascal Tokodi (Nelson) telling President Uhuru Kenyatta to watch “Selina”, a show in which he is the lead actor shows us that we still have actors who are not beggers, and strongly believe in their hustles,” added Daniel Maithya.

But Victor Isadia said that Pascal Tokodi lost a chance of a lifetime.

But Philip Etemessy wondered why people were defending the actor.

“There is no way you can defend Pascal Tokodi. He lives in a bubble hence he had no complaint to make to the president,” he said.