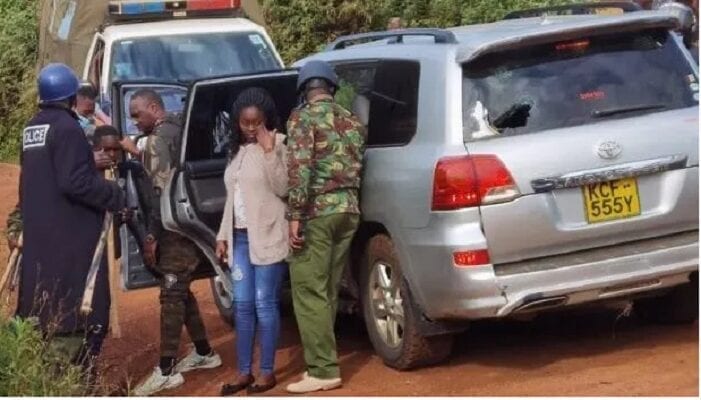 A number of by-elections are currently underway including Matungu Constituency (Kakamega), Kabuchai Constituency (Bungoma), Hells Gate, London Wards (both in Nakuru) and Kiamokama Ward in Kisii County. Voting in all polling stations began at 6 am, on Thursday, March 4.

“A DCI officer robbed me of my Ksh2.5 million and I, later on, found him in his car repacking the money into his bags. He strangled me when I confronted him. This is robbery with violence,” Malala lamented.

15:05: Matungu by-election: An agent is stripped naked by irate residents as Kakamega Senator Cleophas Malala and the police watch. The man was accused of bribing voters.

A landrover was also vandalised in the melee.

13:39: Reports allege that police officers are surrounding Rashid Echesa’s Home in Mumias. A manhunt was also launched for the former CS who vanished after assaulting an IEBC official.

13:27: IEBC chairman Wafula Chebukati calls for the immediate arrest of ex-CS Rashid Echesa who was caught on video assaulting an election official in Matungu.

13:19: Low voter turnout witnessed in Huruma Ward (Eldoret) by-election. This was attributed to most voters being at work as it is a weekday.

13:00: Police deny arresting UDA candidate Moses Nyakeremba in Kiamokama ward, Kisii County. A statement by the National Police Service clarified that individuals who were arrested were those accused of voter bribery.

Grieving families in Kenya speak of terrorism rumors before massacre