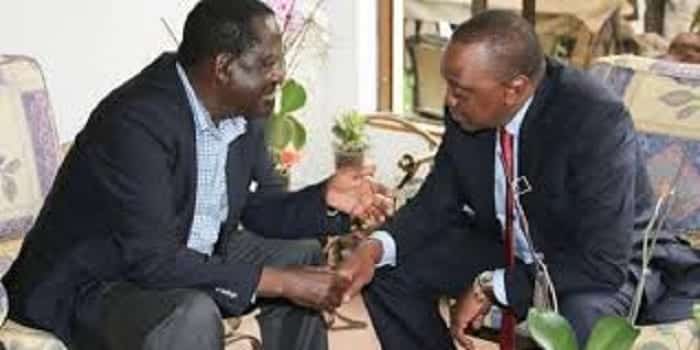 The two discussed a number of issues among them; the conflict surrounding the Building Bridges Initiative (BBI) and the 2022 succession politics.

During their meeting, Odinga and the Head of State agreed to rally their troops to back the BBI agenda with Kenyatta assuring that all was well, despite the rumours that had been fueled in the last couple of days by some leaders.

Kenyatta allegedly expressed concerns with some of the statements made by Odinga’s allies, including Orengo, who were criticising government officials.

Their discussions were preceded by reports that the BBI secretariat offices had been closed and Interior PS Karanja Kibicho allegedly threatened the unity of the handshake.

Additionally, Kakamega Governor Wycliffe Oparanya and a close ally of the ODM leader had also wanted the referendum pushed to next year so that available resources could be used to deal with Covid-19.

The claims were further fueled by the One Kenya Alliance of Kalonzo Musyoka, Musalia Mudavadi, Gideon Moi and Moses Wetang’ula’s move to isolate Odinga in their 2022 political strategy, forcing him to form a coalition with Deputy President William Ruto.

In a show of unity, Odinga and Kenyatta toured the City together on Thursday, in a bid to show their supporters that the handshake was still intact. The tour came just a day after ODM party announced that the former had tested negative for Covid-19.

“My partnership with Raila allows us to do this, to work together to bring development to our people. I want to thank Raila for coming with me. I thank God that he is now Covid negative,” the president said after the tour at State house.

On his part, Odinga expressed gratitude to the President for the chance to tour the city and inspect projects.

“Nimetoka nje kwa mara ya kwanza na Mungu ni mwema. Kwa wiki tatu nimekuwa katika hali mahututi (This is my first public appearance and God is good. For three weeks, I have been in critical condition,” the former premier said.