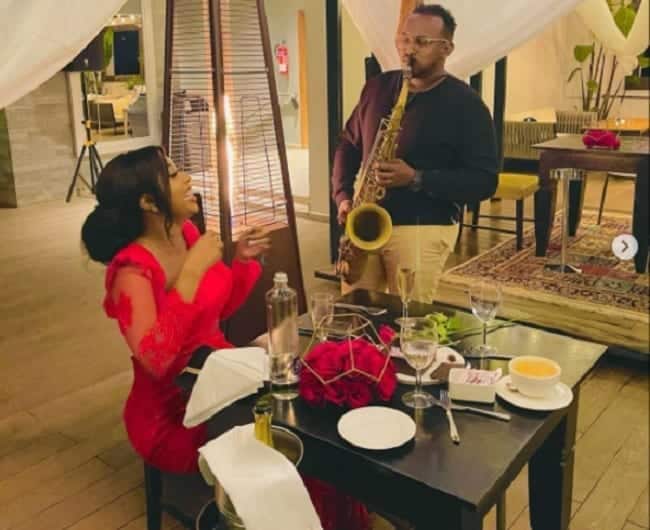 Popular Kenyan socialite Faith Makau better known as Amber Ray is officially off the single people’s club after revealing she got married to her long-term boyfriend, Jamal ‘Rohosafi’ Marlow.

Opening up on her marriage details during a previous Question and Answer session on her Instagram, the mother of one disclosed that she is officially married to the famous city businessman as his second wife.

“Am curious, are you Jamal’s second wife?” posed one of her fans, to which she responded, saying, “YES.” “Legally?” asked another, and she replied, “Yes.”

Although the couple’s relationship seems glamorous online, the social media influencer admitted that choosing to settle down as a second wife was anything but easy, adding that most people hide their status for fear of public criticism.

“Being a second wife is not easy, my sister.

“We are many. It’s just that most of us live in denial, and also most men don’t have the courage to come clean about it, and people only find out on the day of their burial,” she wrote.

Amber, who admitted to going through divorce twice, explained that her current relationship with Jamal is by far the best she has been in. Even though he is committed to his family, Amber says losing him is the least of her worries as she lives in the moment.

“Honestly, it’s really complicated, but 70% I’m happy, something I have never gotten before. And no I’m not scared because I live for now,” she wrote.

Jamal and Amber Ray’s relationship began way back when the businesswoman was still married to her ex-husband Zaheer Jhanda. Even after Zaheer and Amber’s divorce, the two maintained their friendship which grew stronger by the day.

“We have been friends for so long even when I was married to my ex. He is my best friend. He knows more than what’s on social media,” she added.

Dropping a few tips for her followers, the curvaceous social media sensation encouraged netizens to cut themselves off situations that brought them nothing but misery. Using herself as an example, Amber explained that she chose herself and walked out of her marriage when she realized it was doing her more harm than good.

“I am so selfish when it comes to me. If it doesn’t work for me, I cut it no matter the cost because I believe there is nothing more expensive than my sanity. You have to take care of yourself for you to be able to take care of others… I’m the breadwinner, so if I let myself down, I let a lot of people down, and I can’t afford that. Always choose you and start your healing process.”

Setting the record straight on how she gained her wealth, Amber Ray revealed that she did several odd jobs, including being a waitress to make ends meet.

“I have sold animal intestines (matumbo), cereals, I have even sold milk. I was once a waitress, and for my last job, I was head of customer service at e-citizen and still in between, I was trying several businesses as my side hustle. It’s just that we don’t like what we have gone through… We work hard behind the curtains. There is no easy way to success, even for you to get good money from a man you have to have your own money.”

Photos:Uhuru in Migori before the chaos

Thailand Cave Rescue To Be Turned Into Movie