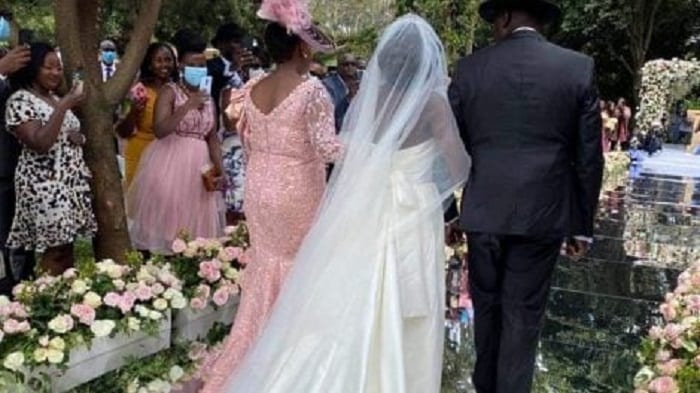 June Ruto who is attached to the Ministry of Foreign Affairs wedded his Nigerian lover Alexander Ezenagu at her father’s official residence in what has been termed as the wedding of the year so far.

It is not clear whether Kenyatta and Ruto were invited.

But the three politicians have maintained a close affiliation in private spanning decades despite their political differences and it is normally expected they will grace such an event.

For example, Ruto was a constant fixture at the Odinga’s residence when their eldest son Fidel passed on in 2015.

He was also spotted touring the country with one of President Kenyatta’s sons.

Kenyatta and Odinga were also absent at the engagement bash of these lovebirds two weeks ago.

But Kenyatta appeared to publicly congratulate the DP ahead of the wedding and promised to invite them for a meeting when his schedule allows.

“Pongezi tena saana (Congratulations)… you will tell them…nitawaona nikitoka Kisumu (I will see them when I come back from Kisumu),” he told Ruto.

Tellingly, Mudavadi encouraged leaders to put their differences aside and attend such important occasions when called upon to attend.

“Indeed, family ties are key in building societal values. As leaders, we should sometimes rise above the din of politics and instead nurture that which unites us. Having time for our families is key in upholding family values in our society. I wish the newly-wed couple a happy and prosperous life together,” he said.