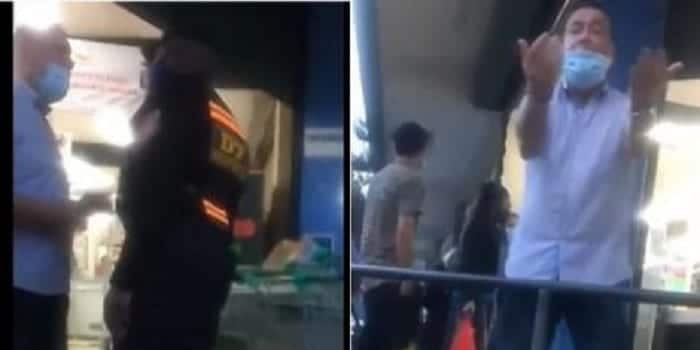 A foreigner was recorded on camera insulting and threatening to assault a security guard and Nairobi residents.

The white man had confronted the guard who works at  Chandarana Supermarket in Ngara, in a video shared on Wednesday, May 5.

His accusants claimed that the guard had denied him entry into the supermarket for undisclosed reasons and instructions issued by his supervisors.

“He was so abusive. Guards are under strict instructions from companies and management to carry out their jobs.

“It is sad seeing such people attempting to use their powers to assault and abuse our locals,” the Nairobian who recorded the video complained.

In the video, a resident can be heard defending the guard, insisting that the guard had the right to restrict anyone from entering the premises.

The watchman seemingly appeared to be standing his ground, blocking the foreigner at the entry as on-lookers and passers-by criticised the white man.

One of the on-lookers dared him to beat the guard and risk being reported to the police. He further accused the foreigner of racism.

“We will send this to diplomats and the police. This is unfair. Why should you beat a security guard?” he questioned.

“Do it, bring it on! Do it!” the foreigner threatened while abusing the witness who was recording the video.

The Directorate of Criminal Investigation (DCI) was urged to investigate the matter.

Kenyans can get opportunities to migrate, live and work in Diaspora

Word of the Day:Living with Enthusiasm

ODM Titanic: The ship sinks as the captain watches

AUDIO:Mutua to sue Kalonzo for linking him to Kiala daughter’s…