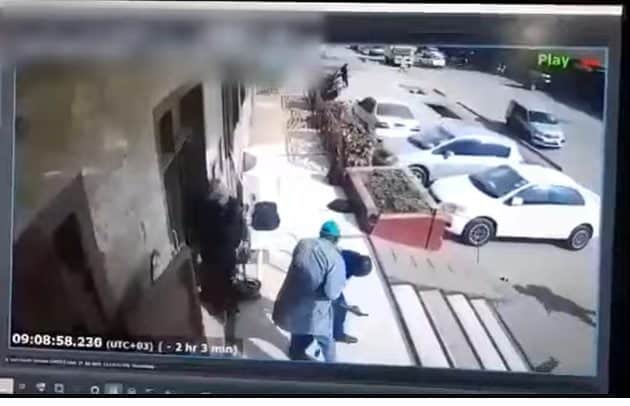 A CCTV footage has emerged showing  a daring bank robbery on Tuesday morning, July 27, in Matuu town in Machakos County.

The two minutes and 16 seconds video showed a commotion ensuing after the suspected robbers shot in the air and area residents scampered for safety.

Two of the suspects then proceeded to rough up and disarm a police officer who was manning the premises before pushing him in to the banking hall.

The third armed suspect was left manning the entrance and was seen pacing in and out of the hall.

Media reports indicated that the robbers held customers and police officers hostage for ten to fifteen minutes before they stole and escaped.

Witnesses stated that there was a heavy exchange of gunfire as thugs shot in the air.

“The thugs got in the morning as the staff opened the hall. It was around 9:00 a.m. They took everyone hostage and closed the doors.

“There was a gun battle but they were shooting in the air. One thug was shot in the arm,” stated one witness.

Police officers have since launched an investigation into the matter.

A similar incident was witnessed in the Nairobi Central Business District (CBD) on Friday, July 2, when robbers attempted to steal from a bank.

The robbers had planned to drill their way into the bank in the wee hours of the morning but were caught just before they could get away with cash.

A major hunt was Tuesday launched for gunmen who disarmed police and raided Equity Bank Matuu branch in a heist.

Witnesses and police said the gang of three first attacked two police officers who were on duty at the facility and grabbed their guns before storming the bank.

They ordered some of the staff and customers present to lie down in the drama before they stormed out.

Police say they don’t know how much, if any, was robbed.

According to police, the gang also engaged responding teams in a shootout and they suspect one of the men was injured.

The raid is said to have lasted over 10 minutes before the gang drove off amid a chase.

A crowd surged at the facility long after the gang had escaped.

Police squads said they were pursuing the gang on the highway leading to Nairobi.

All police facilities were put on alert to lay roadblocks and stop the gang which changed tack and used a motorcycle to escape.

Equity Bank in a statement said security agents led by local authorities are on the scene investigating the incident.

“We had a distress incident today morning about unauthorized access into the banking hall of our Matuu Branch. Nobody was injured neither were the vaults accessed,” the bank tweeted.

We shall crush you, Museveni tells Machar