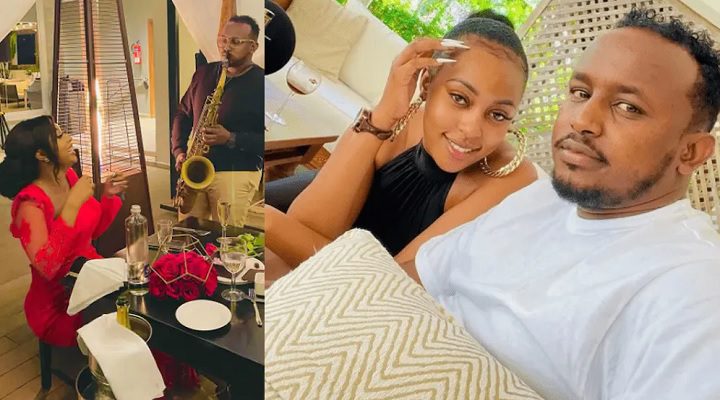 Socialite Amber Ray has declared herself single and confirmed that she is no longer dating matatu boss Jamal Roho Safi. She said they had a misunderstanding and could not resolve their issues. The socialite said she is not heartbroken and will date a foreigner next

Rumours have been swirling that they parted ways, and she set the record straight through a Q and A session on her Instagram stories. “Are you together with Jamal? If not, what happened,” a fan inquired.

She responded by writing: “No, not anymore.” She declined to shed more light on their breakup, saying they had a fallout. Amber further said that they could not solve their differences, and they opted to part ways.

Her response fuelled more inquiries into the matter, with another social media user inquiring if she is heartbroken. “Are you heartbroken or feeling depressed?” the fan posed.

“As I said, I live for now, and life is all about creating memories,” she wittily responded. Amber and Jamal’s wife Amira infamously traded insults in Syokimau and a fan sough to find out if she regretted it. “Do you regret fighting for him?” the Instagram user asked. “Actually, I was fighting for me. When someone steps on me, I must defend myself,” said the mother of one.

After the fight with Amira, Jamal got amber a new house in Hurlingham, and according to the socialite, she is not going back to Syokimau. Amber divulged that if she is to move, then Kitusuru is her next destination.

At the height of their romance, Amber got a tattoo of Jamal on her back. However, she informed her followers that she would cover it up.

“I will get a dragon tattoo to cover it up, and life will continue,” she wrote.

Soon after announcing the breakup, one of her followers sought to replace Jamal, but Amber said she wants to date a foreigner. “Right now, I want to try dating internationally. I must represent all Kambas abroad,” she wrote.

Amber and Jamals’ relationship was rumoured to be over when she deleted all his photos from her page. Jamal quit social media soon after. Jamal’s wife Amira was then spotted driving his Range Rover, leaving netizens wondering if they had reconciled.