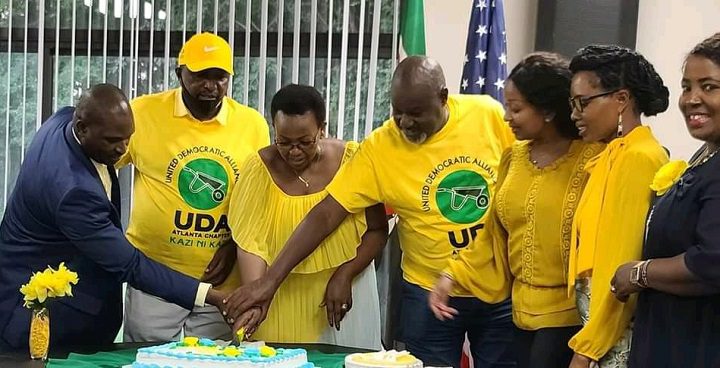 The secretary-general Ms Veronica Maina joined honourables Onesmus Kimani Ngunjiri of Bahati, and Caleb Kositany of Soy in a marathon tour of the United States where they launched several Party chapters.

The first chapter in Seattle Washington was launched virtually in June by the DP. It must be remembered that the initiative to launch UDA chapter in North America was mooted by Mr John Njenga the chairman of the New England chapter, Pastor Dorcas Ndambuki and David Gikonyo.

Consequently, Boston became the first UDA chapter to be addressed physically by the Secretary-General and two UDA leaning members of Parliament while the DP addressed the launch virtually.

Mr Samuel Mwendwa who is also, the organizing secretary of the Atlanta chapter observes that, the unprecedented foray into the diaspora by the DP is a clear demonstration that he recognizes the critical role played by Kenyans domiciled abroad in nation-building.

The signs are good from the DP to tap the diaspora expertise into his government after clinching the presidency next year.

The attendance by the UDA Secretary General, in the opening of four-party chapters to bolster the hustler movement in the US reflects Ruto’s practical, and interactive approach to playing his political cards.

The visit by two MPs and the party secretary-general stirred the diaspora. Honourable Ngunjiri, delighted the crowds in Boston, Minneapolis, Atlanta, and Dallas with his social efficacy… “Nimepakisha mambo mawili dunia hii, kusema ukweli na kungojea kuenda mbinguni.” (I’m only remaining with two things to fulfil in this earth; to speak the truth and wait for the rupture to go to heaven)”.

The Soi MP’s gracious address to UDA supporters earned him the tag of governor-in-waiting. Hounourable Kositany will vie for the Uasin Gishu gubernatorial seat to succeed Jackson Mandago whose second and last term ends next year.

The three leaders echoed the DP’s promise of direct engagement of the Kenyan diaspora.

The challenges facing Kenyan domestic workers in the Gulf States came to the fore. The UDA Secretary-General was empathic that something needs to be done to address the agony of our girls in the Gulf. She appreciated Mr David Gikonyo who is also UDA Coordinator for organizing a successful virtual meeting which was also attended by honourable Ngunjiri.

The girls who attended the virtual meeting from the Middle East expressed the pain and suffering they are going through under rogue employers. They urged the MP and the secretary-general to reach out to the Ministry of Foreign affairs to address their plight.

“The torture our girls are going through in the Middle East is despicable. It must be brought in the open before the World.” It’s sad that in the 21st Century, we are experiencing a situation similar to 18th-century slavery.” Said Apostle Esther Ndirangu, while addressing some of the girls via the zoom platform.

During the Dallas chapter launch, honourable Ngunjiri paraded all UDA aspirants who will vie for member of Parliament in next year’s election. He promised that UDA party nominations will be conducted with fairness to grant every aspirant an equal chance in the nominations. The aspirants present included Jimmy Onkangi who will vie in Kitutu Chache South, Abraham Kirwa, in Mosop, and Dominic Mangerere, in Bobasi constituencies.

Out of the 5 UDA chapter launches in the US, the DP has managed to address two virtually in Seattle and New England. The UDA Secretary-general, and honourables Ngunjiri and Kositany represented him well in Minneapolis, Atlanta, and Dallas.

The significance of the Kenyan diaspora for the Ruto campaign cannot be overstated. They have promised to mobilize campaign resources, help to craft a campaign message, conduct publicity

as well as spreading the hustler movement message on the ground due to better access to technology.

The UDA leaders in cities like Minneapolis, Boston and Dallas where the majority of Kenyans reside will play a critical role to galvanize resources and physically travel to Kenyan and campaign for the DP and other UDA candidates.

The chairman of the Minnesota Chapter Mr Fredrick Mititi, and treasurer Ms Joan Misoi promised the DP’s entourage that they will not tire or falter to mobilize Kenyans in support of the hustler movement.

For the first time in the diaspora, it’s Ruto, who has demonstrated clear concerns about what is at stake as far as the lives of the Kenyans living abroad is concerned. Former Prime Minister Raila Odinga tried several times to engage the diaspora, but he never succinctly stated what he intended to do to advance their cause. He addressed them the same way any politician does to Kenyans gathered at the Bomas of Kenya.

It’s a defining moment to have a presidential candidate who gives you the opportunity to highlight what you expect his presidency to look like and how you want him to address the challenges facing your constituency. This is the reason why Ruto’s support at home and abroad is growing by leaps and bounds.

He has not only listened and answered questions posed by the diaspora but also, send in elected leaders like Ngunjiri and Kositany and his party Secretary to interact with the diaspora and capture their predicaments and aspirations for workable remedies.

” We are optimistic that the tempo the DP has set to reach out to Kenyans scattered abroad will continue as we stride towards 2022. We are prepared to build campaign machinery which will hit several parts of Kenya to spread the hustler message for Ruto’s outright victory next year.” Said Charles Donga, who is also the chairman of the Atlanta UDA chapter.

Kenyans domiciled in other parts of the globe like Europe, Canada, Australia, and the Middle East and other African countries should expect a robust engagement from Ruto and his campaign entourage.

North American Kenyans will remain the cradle of the diaspora given their huge population, economic muscle and access to better governance systems and processes.

Nyaringo is the President of Kenya Patriotic Movement, a diaspora lobby based in the US