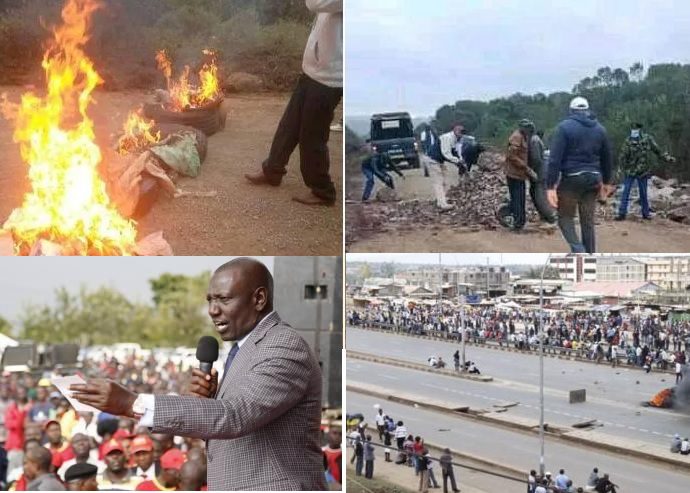 The Kenya government on Tuesday, September 7, announced it had opened an investigation into the chaos that was witnessed in the Kieni constituency hours before a scheduled church event in which Deputy President William Ruto was set to attend on Sunday, September 5.

The National Cohesion and Integration Commission (NCIC), which is under the Ministry of Interior, opened probe into the incident that saw protesters light bonfires and barricade the road which the second in command was set to use.

Ruto had sought to attend a number of church services in the area but some of them declined to host him due to political animosity that was being witnessed.

NCIC through a press statement issued on Tuesday, stated that in collaboration with the Directorate of Criminal Investigation (DCI) had opened investigations into the violence are seeking to file criminal charges against the perpetrators.

“We must therefore condemn in the strongest terms these acts of intolerance and use of abusive language on the national stage. As the NCIC in conjunction with the DCI we are looking into these matters with the view of filing criminal charges against the people behind these regrettable and barbaric Acts,” part of their statement read.

NCIC will also be looking to prosecute individuals who had been involved in violence targeted at other politicians.

The instances include where Orange Democratic Movement (ODM) leader Raila Odinga and other lawmakers were barred from addressing Githurai residents on January 27, during the Building Bridges Initiative (BBI) popularisation rally.

Another incident that has been listed for investigation is where Baringo Senator Gideon Moi was jeered by a rowdy crowd and blocked from accessing some parts of Nandi County On January 2, 2021.

Through their statement, NCIC insisted that all political leaders have the right to assemble in any part of the country and spread their ideas.

“The NCIC would like to remind Kenyans that all politicians have a right to spread ideas to all parts of the country. This is the best way for us as a nation to weigh our options as we approach 2022. We must as early as now reject these acts of intolerance which if not checked will degenerate into violence.”

“It is with this in mind that we would like to warn politicians who have decided to lock their regions and make them unapproachable for their competitors to be ashamed of themselves and that we will be filing criminal charges should we find any of them responsible for such acts of intolerance. As well they must control their supporters because they too will face the full force of the law,” their statement read.

NCIC chairperson further noted that the agency is gearing towards inaugurating the national symposia series that will be a national dialogue platform aimed at address critical issues ahead of the 2022 general election.