Speaking to Kenyans.co.ke, Kibaki’s personal assistant, Ngari Gituku, declined to comment on the retired President’s absence at the low key event held at their Thunguri home.

“Do you know how many brother’s Kibaki has or how many stepbrothers he has?”

“How many family members share the name?” Ngari played coy with the whereabouts of the former Party of National Unity (PNU) leader.

The immediate former Head of State did not also attend the burial of the late Cabinet Minister, Nicholas Biwott in July 2017. Kibaki has been away from the public limelight since he handed over power to President Uhuru Kenyatta in 2013.

In 2016, he was appointed United Nations Educational, Scientific and Cultural Organization (UNESCO) special envoy for Water in Africa.

His son, Jimmy Kibaki, however, represented the family at the burial of Samuel Githinji.

Muriithi, Jimmy Kibaki and Mary Wambui, all addressed the mourners as they celebrated the life of Samuel Githinji. The deceased was born in 1938, seven years after his brother Kibaki.

Githinji passed away on Thursday, October 21, according to a banner showcased at the event. The family, nonetheless, did not disclose the cause of his death. 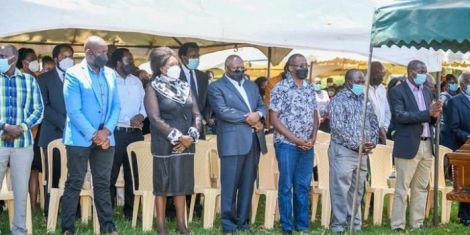 Guests at the burial of Samuel Githinji Kibaki, on Friday, October 29, in Othaya, Nyeri County
FILE 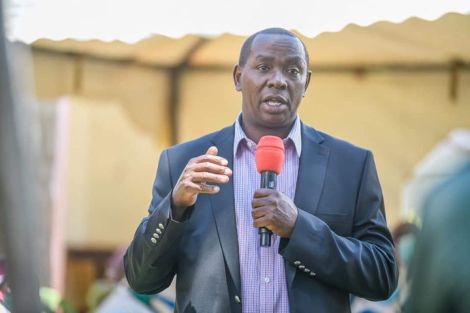 Laikipia Governor Nderitu Muriithi at the burial of his uncle, Samuel Githinji Kbaki in Othaya, Nyeri on Friday, October 29, 2021
FILE

A banner announcing the death of Samuel Githinji Kibaki at his home in Othaya, on Friday, October 29, 2021
FILE
Source-https://www.kenyans.co.ke/