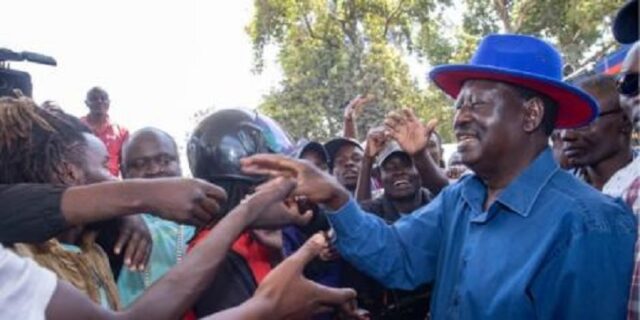 Raila gifted the boda boda riders with the cash to fuel their bikes as pump prices continue to skyrocket.

The former Prime Minister was on a tour in Nairobi’s Ruaraka area on Wednesday October 12, where he addressed his supporters.

He reiterated his stance on the announcement by the Independence Electoral and Boundaries Commission (IEBC) chairperson Wafula Chebukati, declaring William Ruto as the poll winner.

According to the veteran politician, the unexpected declaration of Ruto as the president sent him away from the public eye.

“I look forward to many Kenyans buying, selling and growing their wealth using NSE. I also look forward to the time when a boda boda guy or a mama mboga will trade on their phone as he or she awaits for the next customer instead of betting,” president Ruto stated.

However, Raila opined that boda boda riders barely have enough to put food on their tables let alone invest in the stock market.

“Yesterday (Tuesday) he went to the NSE and announced boda boda riders will be able to invest in the stocks but after discussing with the riders, I have discovered that they barely make enough,” he stated.

“Can a mama mboga invest in the stock exchange? It seems this government has forgotten their promises,” Raila lamented.

Raila who also addressed the public on Tuesday, stated that the boda boda riders earn Ksh700 a day and after buying fuel, a rider is left with Ksh200, which is not enough to buy maize flour.

The Azimio leader accused the Kenya Kwanza Alliance of making additional promises to Kenyans yet they have not fulfilled any of the pledges made in the run-up to the elections.

He noted that after the promised 100 days of revolution by the Ruto-Rigathi administration, he will be there to question them.

SENATOR:MY NIGHT IN POLICE CELLS WITH PROSTITUTES AND THUGS