As soon as he turned 18, my son Nico declared he was getting a driver’s license. Nothing unusual there, but I have to admit, I hesitated. Nairobi is not exactly suburban Maryland. Driving in Kenya is a test on all your senses, an adrenaline rush, a fight for every inch of road space on deeply potholed shoulderless roads. But if Nico learned to drive in Nairobi, he could face any road challenge.

Driving evokes very strong feelings in Kenya. The roads are some of the most dangerous in Africa. Bribing police officers is the main means of resolving traffic fines. Newspaper headlines splash “carnage” frequently across front pages and publish gut-wrenching photos of crumpled cars and trucks strewn across highways.

And no word evokes more outbursts, stories and complaints than the mere mention of “matatu” the 14-seat Nissan mini-van that serves as the ubiquitous hybrid between a public bus and a taxi.

Matatus (the name derives from the Kiswahili word ‘tatu’ meaning ‘three’ for the original three-shilling fare) are well known for their erratic, bullying, high speed driving, curb jumping and yes — driving down roads against traffic. 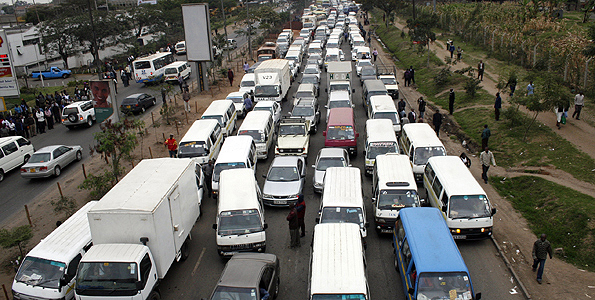 The vans cram in as many as 20 passengers, careening down streets with their side doors open and their money handlers (the touts) hanging half out, calling out to potential passengers, berating other drivers, chatting with fellow touts or just enjoying the breeze.

I love their names emblazoned on their windshields: ‘Precious,’ ‘Osama’ (with a huge picture of Osama bin Laden on the back door), ‘Facebook,’ ‘Anxious’ (he expresses a feeling I frequently have on the road), ‘MoAss’ and Nico’s favorite, ‘Snoop Dogg’ with an electric green body, dark tinted windows, a spoiler and deafening music. But they also terrorize. Matatus contribute to many of the 3,000 deaths every year on Kenyan roads.

Funny: Man’s phone snatched in Nairobi, pleads with thief to…

Nico signed up at AAKenya, the Automobile Association of Kenya, supposedly the most prestigious of Kenya’s many driving schools whose training cars and trucks slowly ply the roads with huge yellow and black checkered signs on their rooftops.

I was impressed that its website promised defensive driving and assured readers that: “It is indicative from our roads that most motorists are not intentionally dangerous.” What a relief for me to know that matatu drivers don’t intentionally want to kill their passengers. 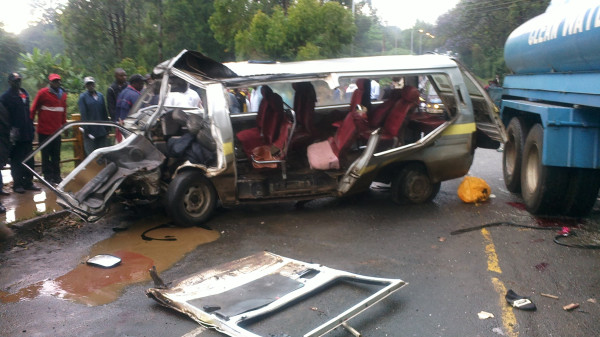 Nico started out with classroom training when an instructor handed him a toy car about the same size as the scores of Hot Wheels his seven-year-old brother keeps in his room. With car in hand, driving on a table-top road model, he practiced the rules pertaining to four lane roundabouts (for American readers: traffic circles).

After that he worked at parallel parking his toy car. This same classroom training was repeated every afternoon for a week before he graduated to driving very slowly a small dented hand shift car.

On the day of his scheduled test, Nico showed up at the crowded center where an instructor came over to give them all a tip. “Just remember that if you want to pass the test, you must show you can shift from first to second gear,” the man advised the group.

The driving students were then taken to an unused empty stretch of paved road. Nico and three women were scrunched in the small testing car while 30 others followed sitting in the back of one of the driving instruction trucks. The first woman tried in vain to turn on the ignition stopping only when the instructor shouted at her that the engine was already on.

She passed despite veering off the road as she tried shifting gears. The next student was made to start the car on an incline. She too passed despite the fact that the car slid into the student-filled truck. Nico was next. He focused on shifting into second gear and was aiming for third when the testing officer told him to stop. Barely 100 meters into the test, the instructor informed him he had passed as well. Nico concluded that no road was safe with drivers who had received his level of training. A friend chided him for taking lessons instead of just buying a license.

This week, the Kenyan government has implemented draconian new driving laws with massive fines and/or prison sentences. It has left many Kenyans (and myself) scrambling to buy extra hazard triangles (the country is apparently sold out), first aid kits and fire extinguishers for their cars. Yet like much of what happens in Kenya’s hallways of power, they only address the problem from one perspective.

No regulations are aimed at better driver’s education or better training for police officers. None of them address motorists’ rights. There are new penalties for exceeding the speed limit by 20kph or more (a minimum fine of $240 and/or as much as three years in prison). But there is still nothing in this Traffic Act which describes how speed will be measured or when there will be speed limits posted on any Kenyan road (apparently the Highway Authority has to do that).

Much of the new laws focus on the regulation of matatus and other public service vehicles whose drivers must now be re-tested every two years, be licensed and wear uniforms. Drivers and touts have to be permanently employed, a rule that will hopefully stop performance commissions at the root of their rule-less over speeding.

To many these laws feel like nothing more than a bandaid. They don’t take into account that the number of cars on the road have quadrupled in the past 20 years. With 40 million citizens and one million cars, Kenya has virtually no sidewalks or bike paths. And what about the police? These new laws just open the door for a greater level of corruption in the ranks. In addition, nothing has been put in place to help police maintain law and order in a deeply chaotic road system.

But Nico is ready. He just received his permanent Kenyan driver’s license.