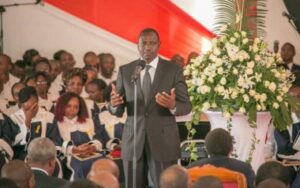 Among those who the VIP mourners who eulogized Mama Lucy was President Uhuru Kenyatta who expressed his gratitude for the support he received from the former First Lady when he faced trial for crimes against humanity at the International Criminal Court.

“When things were very tough for me, infact very, very, very, very tough… Mama Lucy supported me so much. Without her hata sijui mambo ingekuwaje (I don’t know how things would have turned out),” President Kenyatta said.

Deputy President William Ruto also revealed how Mama Lucy endorsed the current Jubilee leadership way back in 2010, three years before they were voted into office.

“Mama Lucy once summoned me to State House during a party in 2010 and asked me to work with President Uhuru Kenyatta. I later informed the President and that is why I am Deputy President today,” Ruto said.

Former Tanzania President Jakaya Kikwete, who was also in attendance, said Tanzanians were shocked to learn of Mama Lucy’s death, because they did not know that “she was sick”.

Addressing tens of thousands of mourners at the event held at the Othaya Approved School in Nyeri County, the departed former first lady’s son Jimmy revealed how her mother dissuaded her from joining active politics.

“I had made up my mind to vie for the Othaya seat but mum told me the political climate wasn’t good for a person of my values,” Jimmy recalled.

This confession is set to further fuel speculation on the long time public spat between the former First Lady and the current occupant of the Othaya parliamentary seat – Mary Wambui – who was present at the function.

It was widely perceived the Kibaki family unsuccessfully pulled all stops to ensure Wambui succeeded Kibaki as Othaya MP.

Jimmy also narrated an unusual incident when security officials at State House attempted to bar them from visiting their dad without “appointments”.

“Mum called all the security guys and declared his children didn’t require appointments to talk to him,” Jimmy said.

Also paying tribute to Lucy was Stella Wanjiru, one of the children the former First Lady sponsored through secondary and university education.

“She told me to work hard and not fear exams. Once she put me on the phone to talk to the President. I was amazed and I’m here to say thank you, “Stella said of the former High School teacher.

Mama Lucy Kibaki died on April 26 in London while receiving treatment for an undisclosed ailment.