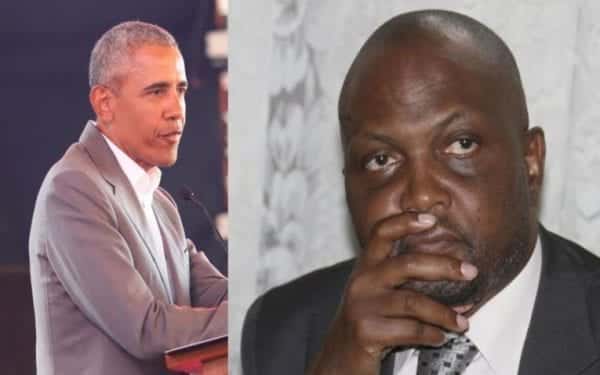 Barely hours after former US President Barack Obama visited Kogelo, Siaya, Gatundu South Member of Parliament Moses Kuria was among the first politicians who took to social media to criticise.

Obama gave the country a message of hope and applauded the efforts of both President Uhuru Kenyatta and Raila Odinga in bringing the nation together.​

“We now have a new Constitution. We also have a president and a major opposition leader who have pledged to build bridges and have made specific commitments to work together. So what we see in Kenya is a part of an emergent more confident and more self-reliant Africa,” said Obama as he was speaking the inauguration of the Sauti Kuu Vocational Centre founded by Auma Obama, his half-sister.

This morning, here’s what Kuria had to say:

“Lakini Africans especially Kenyans are a weird lot. Barack Obama was President of the United States for 8 years. The most powerful person on earth, with unfettered access to the awesome American economy and the nuclear codes. He did practically NOTHING for Kogelo, Kenya or Africa. Nothing! Zero!

“Today as a Eunuch former President he visits Kenya, we close all the roads for him. He then proceeds to Kogelo, body-searches host Governor Cornel Rasanga and reduces my good friend and Lupita Nyongo’s daddy into a spectator. The skinny kid with a funny name then delivers a 7 minute hollow speech with a curtain raiser from his sister Auma who sets the stage by giving a scathing and condescending indictment of Luo Nyanza leaders.

“No wonder Baba Raila Odinga skipped the event, rightly so. Meanwhile the Chicago benefactor goes on to open a US $ 200K obscure centre for God knows what. The guy found Bill Clinton’s Africa Growth and Opportunity Act (AGOA) in place. The same was expanded by President George Howard Walker Bush . Obama did nothing, absolutely ZERO to expand AGOA. Today he launches a US $ 2OOK whatever in Kogelo. Nani alituroga??”

His complaints were met by resistance from some netizens, who bashed him for criticizing Obama’s visit instead of joining other leaders in welcoming him: