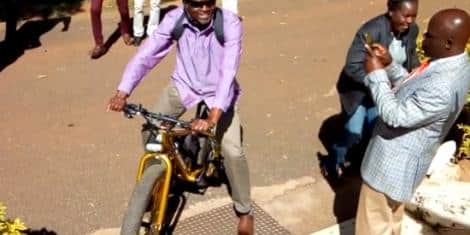 Migori Governor Okoth Obado on Friday surprised both residents and workers at his office when he arrived to work riding on a bicycle.

The governor posted a video of him cycling and explained that he was doing it as a work out routine.

Netizens, however, used the post to remind the politician of his checkered past.

Some made references about his alleged involvement in Sharon Otieno‘s murder and his corruption case.

Others also claimed that Obado only rode to work to appeal to residents.

Jeremy Okoth stated, “When you do something like this and post here, it doesn’t become humility, it changes to PR.”

“Sir, I saw on Daily Nation that all the four Nyanza counties spent zero on development,” noted a Facebook user by the name Perm Nuric.

He proceeded to put the county boss to task on how he planned to change that narrative.

Despite the negative comments, Perm believed that Obado was the only governor who could deliver on his promises.

Vicky Regina commented, “Show offs mtawacha..hiyo nduthi umechukulia hapo kwa gate after parking your car. Danganya watoto (Stop showing off, you just picked that bicycle at the gate after being dropped off in a car. Don’t lie to us).”

VIDEO: Ruth Chemutai Rono gets job at office of the president