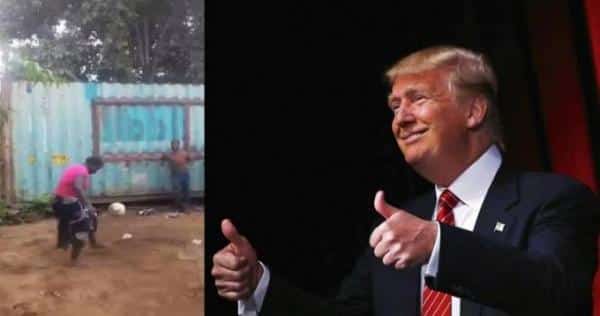 US President Donald Trump has expressed his impression by a video of an unidentified woman juggling a football that went viral in Kenya.

Trump shared the video on Twitter applauding the level of skill and talent shown by the woman as “Amazing!”.

One of the earliest social media post to share the video alleged that the woman was a Malawian national although other sources disputed this claim.

Speaking Swahili, the woman is heard accepting a challenge by her audience to wager 100 ball bounces.

After taking to juggling the football, the onlookers go quiet probably waiting for her to mess.

However, the woman doesn’t disappoint but goes ahead to juggle the ball using the head, her shoulders, knee, chest, and even the neck.

Kenyan Activist Wanjuhi Njoroge to Share Stage with Trump at…

The crowd broke out in applause cheering her and she kept going to their amazement.

After an impressive act that lasted close to two minutes, the woman stops with the remark “Pesa yenu ndogo (Your money is not enough)”, in a likely reference to the amount paid for the bet.

Netizens have called for the woman to be auditioned on several platforms including Churchill Show and Britain’s Got Talent.

Others have called on sports betting companies to have the woman as their brand ambassador owing to her impeccable talent.